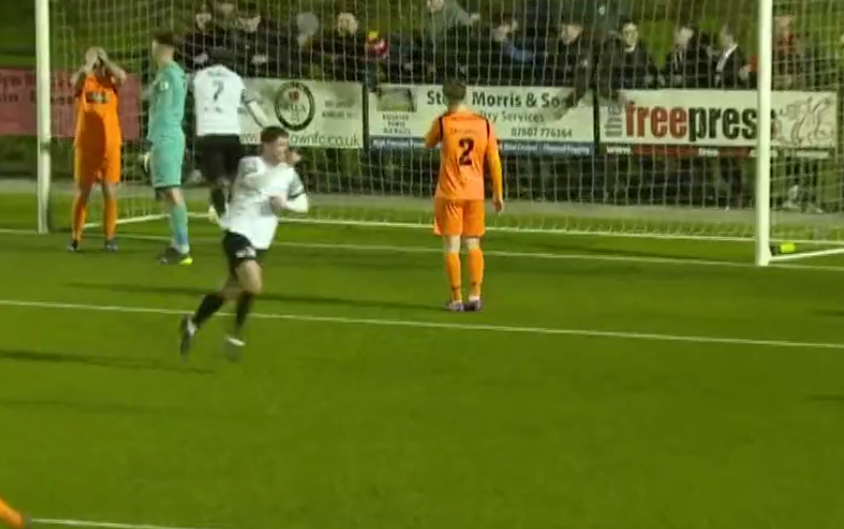 BALA Town secured bragging rights for the second time this season at Maes Tegid with an impressive 2-0 win over Caernarfon on Friday night (Mar 25).

Dean Ebbe continued to cause the Cofis nightmares as he grabbed his fourth goal against them this season late in the first-half. While another injury-time goal this time by Ollie Shannon, who came on in Ebbe’s place, made it a comfortable victory in the end with his last-minute strike.

Bala’s new look attack, which has started to click in recent league games, brought an attacking approach to the opening exchanges.

Calum Woods looked lively down the right flank supporting Paul Rutherford before the defender was forced off with an unfortunate injury. Kieran Smith was denied two early chances by both a defender and the Caernarfon goalkeeper as Bala searched for an early lead.

Alex Ramsay then proved why he is one of the best shot stoppers in the league as the Lakesiders’ No1 pulled off yet another save of the season contender when Sion Bradley unleashed an effort that looked to have beaten Ramsay, but somehow the goalkeeper’s reflexes proved too much as he pulled off an unbelievable save.

Down the other end not much later it was Jakub Ojrzynski’s turn to pull off a fabulous save as he denied Dave Edwards’ half-volley that was headed straight for the back of the net. Again, Ojrzynski was alert to prevent a strong Nathan Peate headed effort from a corner as he tipped it over the bar with another great reflex save.

Later, Chris Venables looked certain to give Bala the lead when he received the ball inside the area with some time to manoeuvre but his first touch allowed the Cofis’ goalkeeper to pounce and stop the danger.

If it wasn’t Ramsay there to deny Caernarfon then the woodwork was when Joe Faux’s thunderous strike late in the half looked to have beaten the Bala keeper, just not the bar.

On the stroke of the half-time, Bala took the lead through Ebbe. The man who had already scored in both Gwynedd Derbies this season with a simple tap-in to add to his tally thanks to a composed Chris Venables’ assist inside the six-yard area.

Following half-time, the Lakesiders looked eager to add some much-needed comfort with Caernarfon very much still in the game. Will Evans pushed forward on every opportunity looking to double Bala’s advantage.

The first real opportunity of the second-half fell to him too as he struck the side netting from a break lead by the goalscorer Ebbe.

The following minutes involved chance after chance for the Lakesiders which either saw the Caernarfon goalkeeper or backline get in the way of a second for Bala. With a little more room and time to try his luck Edwards did so from around twenty yards out, but his curling effort went past the wrong side of the post.

Venables looked to get himself back amongst the goals with his powerful effort which looked to have beaten Ojrzynski but not the post as it came bouncing back into welcoming arms of the goalkeeper.

Shannon came on for the remaining minutes in place of Ebbe and he was able to get onto the scoresheet with the second injury-time goal of the game.

Venables providing his second assist of the game with a neat cross into the awaiting midfielder who headed home his sixth league goal of the season.

That goal clinched Bala’s second Gwynedd Derby win at home this season in an important victory which sees the Lakesiders continue to hold a firm grip on second place despite Newtown picking up an unlikely win at the home of the league leaders.

Penybont move up to fourth