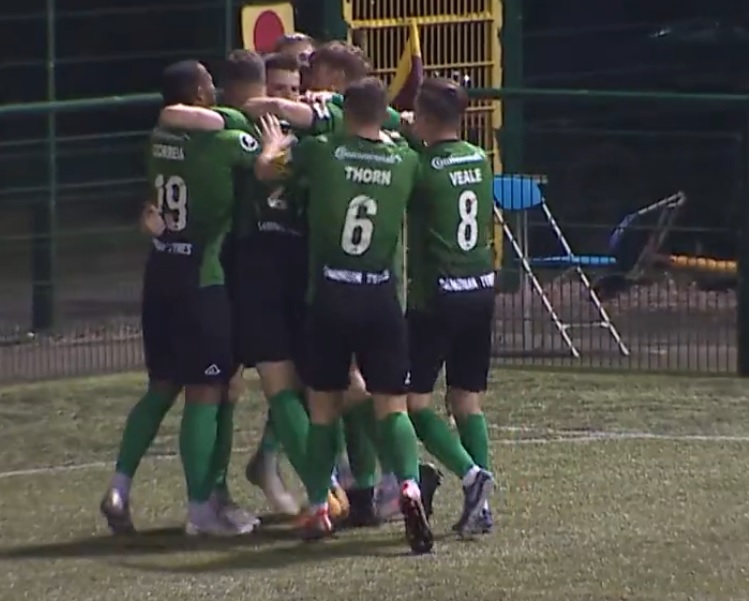 It was enough to earn the win for the Black and Greens which moves them two places up the table and only three points off the Top Six.

Black and Green Supporters from Ceredigion, the Cardiff base Sole Crew, and Harry Franklin’s personal fan club all turned out in earnest and with around 40 singing supporters making their presence felt Antonio Corbisiero’s men were at it from the start.

Franklin himself blasted over after being fed by Jack Thorn, and Rhys Davies fired over too in the early stages.

Then came a crucial moment in the ninth minute as Jack Rimmer picked the ball up on the right flank and delivered a peach of a cross for in form Jon Owen to head home into the far corner, and send the away fans into raptures and an early disco dance.

With Aber looking solid at the back the hosts were reduced to half chances, although Matt Chubb did see a shot rattle off the crossbar, possibly saved by Gregor Zabret on the way, Adam Roscrow had a shot saved and Charlie Corsby fired wide.

Jamie Veale then had a shot deflected for Aber, and with Rimmer testing Alex Lang in Met’s goal with more cultured crosses the game was well balanced.

Roscrow headed wide from a free kick, then at the other end Rimmer found Franklin, and with the whole ground holding its’ breath his audacious chip just cleared the crossbar.

Next was the excellent Louis Bradford, who gambolled forward and crossed for Franklin to send in another effort which Lang saved on the line. Town then repelled a few long throws and direct free kicks and held on for a precious half time lead.

Into the second half the match continued with few real chances, but with Gregor Zabret in top form all night long in goal for the visitors, not to mention Lee Jenkins and Bradford at centre back Aber looked solid.

Franklin had yet another shot deflected for a corner, then the hard working Raul Correia saw an effort blocked and Jack Thorn fired wide.

Joseph Evans headed wide from Tom Price’s free kick but Met were at arm’s length. Elliot Evans fired over, then at the other end Louis Bradford headed wide for Aber, as a bonus to the superb job he did nullifying Roscrow all night.

As the game wore on Aber dropped deeper and Met had a series of corners and crosses to no avail, Harry Owen fired wide, and then a series of substitutions slowed the game somewhat.

Roscrow headed wide from Tom Price’s ball in, and Aber then repelled a free kick in the fourth minute of injury time, and with the visiting fans enjoying a celebratory dance, the final whistle went and a huge three points were in the bag.

Painting Wales Red! Graffiti murals of football stars spring up across the nation