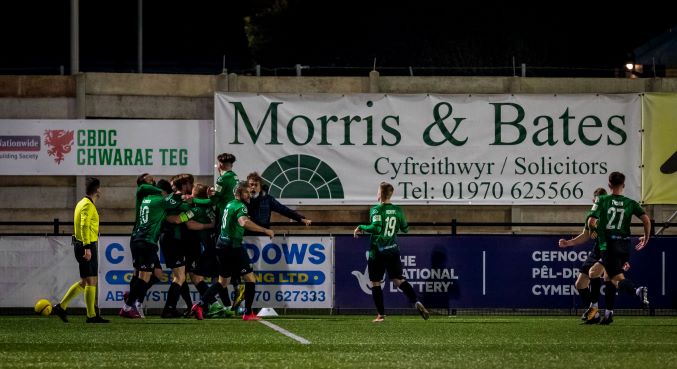 ABERYSTWYTH TOWN moved off the bottom of the JD Cymru Premier table on Tuesday night (Mar 9) as Lee Jenkins scored in the dying minutes to seal a 2-1 win over Haverfordwest County.

Despite the continued absence of fans at Cymru Premier games, the excitement was palpable pre-match for the home side’s return to Park Avenue after three long months away.

An unchanged side was named from Aber’s last-gasp draw at The Oval, testament to the Black & Green performance in North Wales.

From the first whistle, Aber looked the stronger team with confident spells of possession and chances created, but it was the visitors who threatened the nets first as Danny Williams’ effort from a pull-back was finely blocked by Lee Jenkins on 11 minutes.

Aber quickly responded with two chances of their, namely for Jamie Reed whose driven shot was fired marginally wide of the County goal.

It wasn’t until 30 minutes that the game’s next chance arose, again to Jamie Reed who was set free through the middle by a perfect pass from skipper Marc Williams, but County’s last man did well to stick with the veteran and give his keeper a chance to save well.

On the stroke of half-time, Jamie Veale lofted a precise ball to the back post where Lee Jenkins was able to half-volley across goal, but the ball wouldn’t drop in time for two on-rushing Town attackers to convert before the break.

With that, the interval was called with the score 0-0 but it was the home side who had shown the initiative to get in front most often.

Town picked up where they left off in the 2nd half, firstly with another 1-on-1 opportunity well defended before the deadlock was broken on 55 minutes.

A long throw by the energetic Jack Thorn was bravely flicked on by Lee Jenkins to the swinging left foot of Jamie Reed who volleyed it to the top corner.

This being Jamie’s 3rd home debut in Black & Green, how fitting it was for him to be the one to finally find the net, making it a hat trick, a brace, and a lone goal in three consecutive debuts over a 14-year span.

Town made two changes before the 80th minute, with the impressive duo of Franklin and Owen replaced by Owain Jones and Jonathan Evans.

This period saw Haverfordwest find their feet in attack and some sustained pressure on the Aber half but little of great concern to Connor Roberts, until the 82nd minute.

A cross from County was poorly cleared by a defender across his own box to the feet of a Bluebird who was presented the goal in front of him.

Having almost thrown away a lead late on vs Caernarfon mere days previously, it looked a painful case of déjà vu for Town where a deserved three points became one and risked being zero.

However, different to previous games of the ilk, Town rallied late on and looked the stronger side once more heading into the game’s close.

On 85 minutes, loud penalty shouts from factions of the Green Army perched on vans, sat in buses, or stood on ladders where waved away by the referee after what looked to be a compelling case for handball in the area.

In the third minute of four added on, Louis Bradford, on loan from TNS, headed towards goal but the Bluebirds keeper made a good save but could only parry the ball into the path of Jenkins who knocked in from three yards out.

It sparked wild celebrations amongst Aber’s players and they were able to held on for a much-needed win.

On Saturday, March 13, they will look to back up the win as they travel to Jenner Park to take on Barry Town United, kick off 2:30pm.

Haverfordwest will also be back in action on Saturday as they host TNS in a game which is being shown live on S4C and kicks off at 5:15pm.