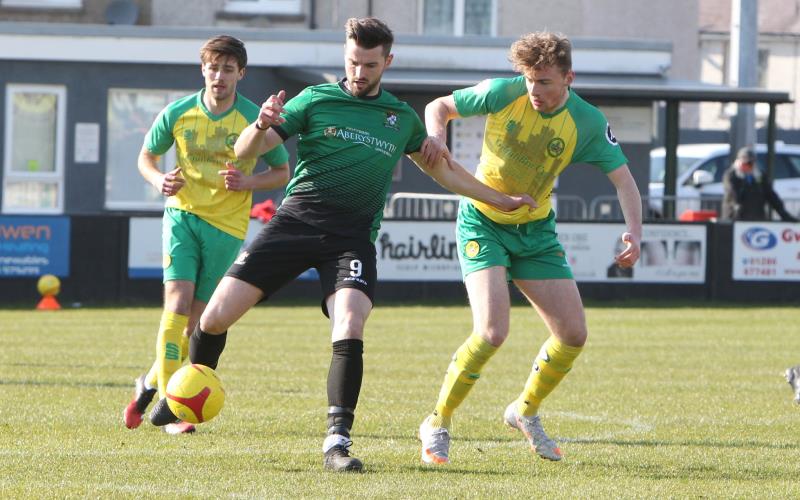 A GOAL deep into injury time earned Aberystwyth Town a share of the spoils on Saturday, March 6, as their game with Caernarfon Town ended 2-2.

Aber’s pre-match preparations were disrupted as the team coach was delayed on its journey to The Oval, with some of the team only arriving 40 minutes before kick-off.

The Aber coaching team, boosted by the arrival of club legend Gari Lewis, gave a debut to Harry Franklin in midfield whilst in attack Jon Owen and Jamie Reed were also making their first appearances since returning to the club. Connor Roberts and Louis Bradford also started, having had their loan spells extended from parent club The New Saints during the enforced break.

Caernarfon had two new signings of their own in their ranks and, as it transpired, they were both instrumental in how the match would pan out after huge impacts off the bench.

Chances were few and far between for both sides in the opening half hour; Jamie Reed and Harry Franklin coming closest for Aber whilst former Seasider Darren Thomas was a threat from set-pieces for the hosts.

The game sprang into life on the 38th minute, as Marc Williams did well to hold off a defender on the right flank before bursting into the box. His cross was cleared, but only to Jamie Veale, who took a touch to set himself before delivering an inviting ball into the box which was met by Jon Owen with a superb volley to make it 1-0 to Aber,

The visitors had to withstand some heavy pressure as Caernarfon looked to get back on level terms before the break, but the defence coped well with the physical presence of Jack Kenny and the experienced Mike Hayes, and Owen’s goal proved to the difference at the interval.

The hosts continued to push for the equaliser early in the second half, but Harry Franklin looked to hit them on the break and after carrying the ball almost the length of the pitch, he found Matty Jones who crossed to Jamie Reed, but Caernarfon goalkeeper Tibbetts did well to claim the ball.

Caernarfon had a number of opportunities but Aber’s defence coped well with the pressure.

It was not all one-way traffic however, and Jon Owen did well to win a corner for Aber, from which Williams had a shot saved before Lee Jenkins follow up was cleared. Jamie Veale also hit a free-kick just wide of Tibbetts right hand post, firing a warning of his capabilities from set-pieces!

As the game entered its final five minutes, Aber’s strong rear-guard was finally breached, as a long ball found Wrexham loanee Jake Bickerstaff who got in between Bradford and Jenkins before firing under Connor Roberts to get the hosts back on level terms.

Two minutes later, a throw in was flicked on by Telor Williams to Sion Bradley, who struck the ball past Roberts from a tight angle to put Caernarfon 2-1 ahead.

The home side could have been forgiven for thinking they had done enough to win the game, with little time remaining, but Aber rallied and looked to push for an equaliser, as Owain Jones replaced Jack Rimmer in an attacking substitution.

With four minutes of the five added played, Marc Williams drove towards the Caernarfon box and was fouled. Jamie Veale set the ball around 25 yards from goal, and then stepped up and struck a sublime free kick past Tibbets to make it 2-2.

That was how the game finished and afterwards, Assistant Manager Antonio Corbisiero said he was ‘more than happy with the performance’.

TNS extend lead at the top