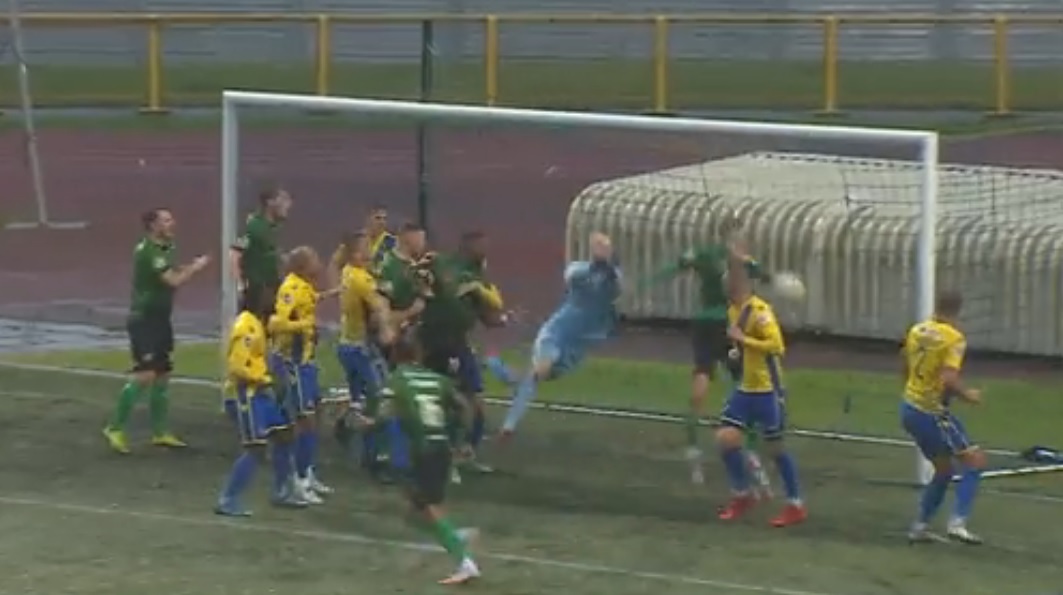 ABERYSTWYTH TOWN produced a stirring second half comeback at a rainswept Jenner Park on Saturday (Nov 6), as Harry Franklin’s 85th minute near post header earned them a valuable away point, after Kayne McLaggon had given the hosts the lead twenty minutes previously.

Two sets of singing supporters ensured a cup tie atmosphere which made for a memorable afternoon down in the Vale, which ended in stalemate.

Roared on by a terrific away support featuring a guest appearance from the Cardiff-based Aberystwyth Sole Crew, the Black and Greens started in a composed manner, but in blustery conditions both sides found it hard to create clear cut chances.

Barry earned some early corners to no avail, then Harry Franklin danced through the home defence to earn a corner for Aber, which was also cleared. Matty Jones had a free kick cleared and Jonathan Evans went wide from close range after a cheeky backheel from Jon Owen.

Aber sub Sam Phillips sent in some dangerous balls from the left flank, which Mike Lewis dealt with well, and despite a late period of pressure from the visitors a half which in all honesty was rather low on quality and clear cut chances ended goal less.

As the weather worsened and the rain swept in from the Severn Estuary the second 45 was a better watch. Curtis McDonald headed wide from Marcus Day’s free kick, and then at the other end Franklin sent in Aber’s first effort on target, with a low shot which tested Lewis down to his left.

Jack Rimmer set up Owen for a great cross which sadly missed everyone in Green in the area, then Gregor Zabret in Aber’s goal made his first save of the afternoon, punching clear a free kick from Day.

McLaggon went close at the near post for Barry, and then with twenty five minutes to go he reacted quickest when the ball dropped in the area and slotted home what seemed like a match winner.

Encouraged by their vocal tifosi however the Black and Greens were certainly not done: a series of corners which ended up with a Lee Jenkins header were repelled, then Jamie Veale played a sweet one two before skimming an effort wide.

With conditions making it hard to play and Barry keeping a high line hope was beginning to ebb away, but then hard working sub Raul Correia earned a crucial corner, Jones floated the ball in and Franklin rose like a salmon to head home and delight the away supporters.

The game now really opened up with Franklin and Jonathan Evans threatening to win the game for Aber, but then Nat Jarvis sent a shot inches wide and an injury time onslaught of the visiting goal ensued, with Zabret needing to be at his best when it really mattered to deny Rhys Cavanagh, Robby Patten and Rhys Abbruzzese’s free kick in injury time of injury time, and the visitors held out for a stirring point.

Town’s Players and Management came over to salute their away support at the end in a pleasing show of togetherness, and a good day’s work was complete.