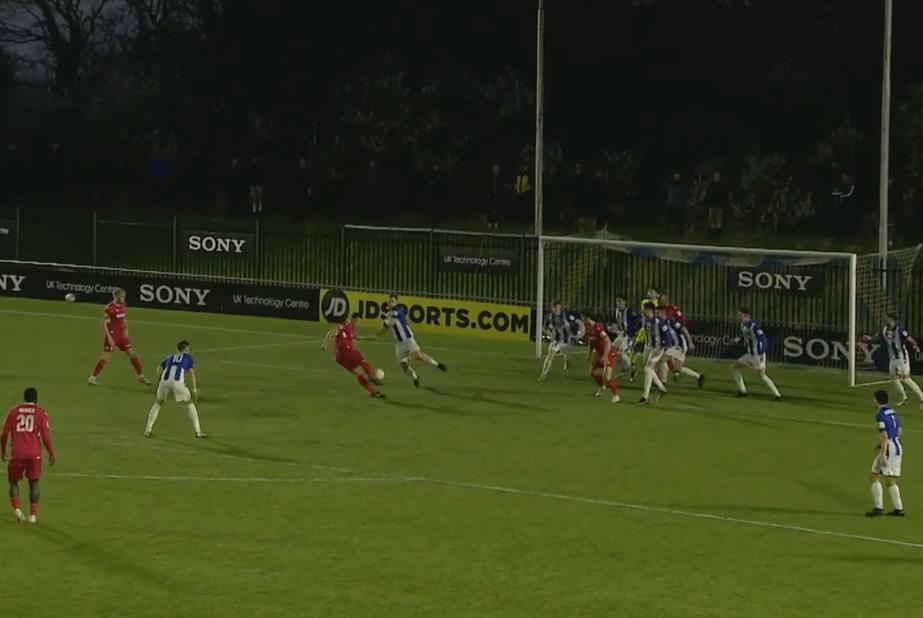 BALA TOWN survived a late comeback from Penybont on Tuesday night (Apr 13), as they sealed a 3-2 win at the SDM Glass Stadium.

The match got underway with an early chance for Raul Correia as he was put through on goal, but his finish ended up going just past the post.

On the 10 minute mark, the Lakesiders had the ball in the net through Correia, but the referee disallowed the goal due to a foul in the build-up.

Will Evans got very friendly with the advertising boards minutes later, as he sent himself crashing over the boards after racing onto a long ball over the top. Thankfully he got up and carried on.

Jonny Spittle was alert to clear the danger of a cross into the box by Penybont, and managed to win a free kick in the process.

Ryan Pryce put a good ball into the box towards Venables, but the Captain’s header back across goal came to no red shirt, and the hosts cleared their lines.

The hosts appealed for a penalty on 27 minutes for a handball, but the referee waved away the appeals and play carried on.

Will brushed passed the Bont right back and put a brilliant ball into the box, but neither Correia or Venables could get onto the ball to finish it off.

Again Correia made himself a threat, this time making space for himself on the edge of the box, but his shot didn’t trouble former Bala keeper Ashley Morris in goal.

A brilliant attacking move from Bala was cut out, as Will was put through behind the defence and put the ball on a plate for Sean Smith with an empty goal to aim at, before the linesman put his flag up for offside against Will.

Despite a dominant first forty minutes from the visitors they had nothing to show for it. But, five minutes before the end of the half, Steve Leslie swung in a corner from the right, which was headed on from the front post towards Antony Kay, with Kay taking aim and putting the ball past Morris and into the net.

The hosts got the game back underway for the second half, and it was Bala who managed to win a corner early on.

Steve Leslie again took the corner, but this time hit a straight ball towards the penalty spot, and in came Antony Kay again.

It was a perfectly directed header from Kay into the bottom right hand corner of the net to double the Lakesiders’ lead and double his tally for the night.

However, it took the hosts just two minutes to get themselves back in the game. Kostya Georgievsky managed to direct his header back across goal, with the ball then hitting the post and Ramsay then punching away, yet the linesman on the far side waved his flag for a goal. A goal that would definitely make it into the dubious goal panel.

Only three minutes later and the hosts almost drew level, but the header was sent past the post.

It was Bala’s turn to claim for a penalty just a minute later when Raul Correia was sent tumbling but nothing was given by the referee.

Chris Venables almost grabbed himself a goal, after making his way into the box, but his shot was dragged wide of the post.

On 70 minutes Sam Snaith, who had just came on for the Bont, tried an overhead kick from inside the box, only for it to hit the post and Bala managed to clear the danger.

Bala were awarded a free kick from about 25 yards out, with Steve Leslie stepping up to take it. A beautifully taken free kick from the left foot of Leslie, saw him curl the ball round the wall and inside the post, giving the visitors a3-1 lead going into the last five minutes.

Back came Penybont with another goal. With just three minutes left of normal time, Lewis Clutton poked the ball home from close range to make it 3-2.

Three minutes of added time were announced, and despite Penybont’s best efforts they could not find a third goal as Bala held on for the win.

On Saturday, April 17, Bala face the side directly below them in the table in Barry Town while Penybont host Caernarfon Town.

Breaking records: The life and death of John Godfrey Parry-Thomas

Cofis stay in top six hunt with win over Flint