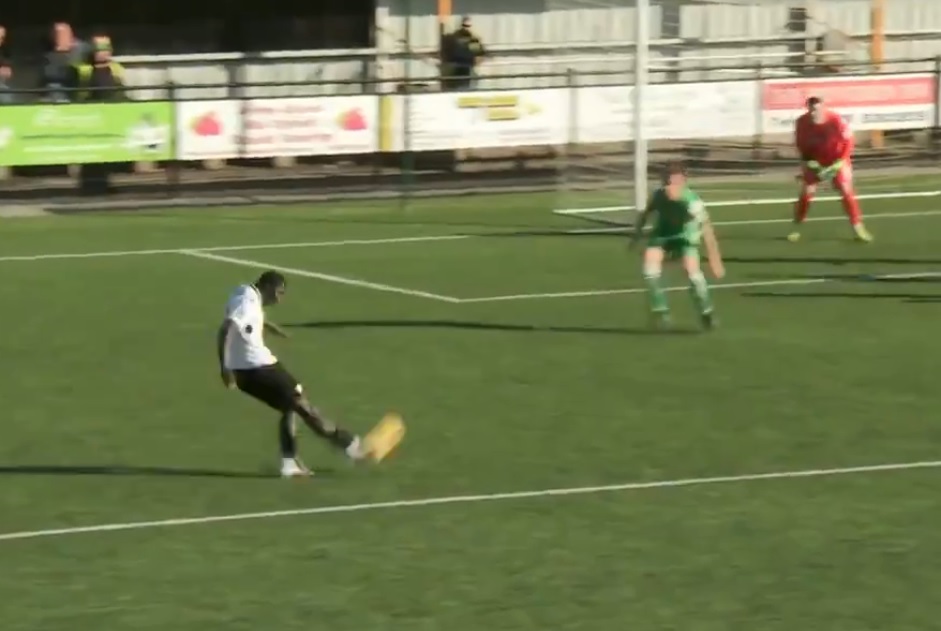 Bala score their first goal of the afternoon

AFTER a run of three straight defeats, Bala Town ended the first phase of the season with a convincing 5-0 win over Flint Town United on Friday (Apr 2).

The Lakesiders returned to Maes Tegid to face Flint in what was a must win game, with Barry Town and Penybont on the catch up going into the Champions Conference.

Before the game, both sets of clubs and club officials held a minute silence to pay their respects to Callie Ramsay, the Father of our Goalkeeper Alex Ramsay, who tragically passed away on Thursday evening after collapsing at a walking football event held at The New Saints’ Park Hall Stadium.

All at Herald Wales join with Bala Town in sending sincere condolences to Alex, Eric and Karen at this time.

Within two minutes of the start, Bala were forced into an early change as Ollie Shannon looked to have gone down off the ball and subsequently was replaced by Ryan Pryce.

It was a cagey affair throughout the first ten minutes, with both teams scrapping for possession.

However it only took 20 minutes for there to be a goal. Lassana Mendes received the ball on the left hand side, he cut in on his right and curled a superb effort from the edge of the box, right into the far corner, a superb goal from Mendes to give Bala a 1-0 lead.

Harri Lloyd, who’d come into the squad on short notice, was called into action on 24 minutes, as he got down well to his left and pushed a shot away from danger.

Will Evans attempted to double the advantage with a right footed shot from outside the area, but his effort went wide of the post.

Anthony Stephens did superbly well to clear a teasing ball into the box, as he headed the ball over the bar to concede a corner.

Bala had a big shout for a penalty with 15 minutes of the first half to go, as Venables looked to have been bundled over inside the box, but the referee waved away the appeals.

The first half came to an end and, despite only being one goal up, it was a good performance from the Lakesiders, who should have been ahead by more at the break.

The home side got the second half underway, and straight away it was 2-0. Antony Kay climbed higher than everyone else at the back post and headed the ball home from a corner.

Venables had another goal ruled out for offside but, moments later, he finally got his goal.

The Captain made some space for himself on the edge of the box, and rifled the ball above the keeper and below the crossbar, as it cannoned off the bar and into the net to give Bala a 3-0 lead.

It could have been four on 67 minutes, as Will Evans went on a driving run towards the by-line, he put the ball across the face of goal, but could only reach a Flint defender who almost put the ball into his own net with his clearance.

It didn’t take long for the fourth goal to come though as Leslie received the ball about 30 yards out and unleashed a bullet into the top right corner of the net.

It was five late on as Chris Venables got on the end of a cross from the right hand side and hit home from close range. That goal was his 19th for the season.