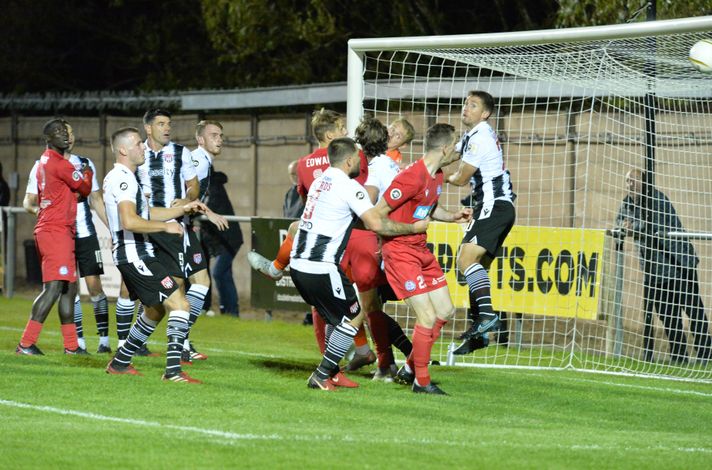 DAVE Edwards’ added-time winner saw Bala Town clinch three points at the Essity Stadium as they came from behind to beat Flint Town United and jump to 2nd in the league.

The Lakesiders controlled possession in the early stages and looked to break down the Silkmen’s defence but were limited to set pieces as Flint survived the early pressure.

Paul Rutherford looked particularly dangerous as his non-stop work rate helped keep the Silkmen pinned in their own half of the pitch.

The Silkmen settled into the game from there and looked to attack down the left through threatening left back Samuel Hart.

Hart almost gave his side the lead when his inviting cross was met by Jack Kenny in the Bala box, yet he couldn’t direct his header on target.

It was Hart again minutes later, delivering another dangerous cross into the area and this time it was met by the head of the unforgiving Michael Wilde who directed his header past Harri Lloyd to give his side the lead.

Flint taking the lead just before the hour mark, shocked Bala who had been on top for large parts of the first-half.

Wilde almost made Bala pay again, when he stole the ball on the halfway line from a poorly directed pass to Oliver Southern, he drove towards Lloyd’s goal but his effort came off the post as Bala blew a sigh of relief.

The Lakesiders stayed composed till half-time as Bala could reset and go again after the break.

Brad Bauress played playmaker in the second-half as he looked to provide the creative spark for an equaliser. He went close to producing it when his low driven cross found a stretching Dave Edwards at the back post, but his shot was tipped away by John Rushton.

Again, Bauress almost produced the equaliser when his cross found Nathan Peate minutes later, but his headed effort was met by another Rushton save.

Lassana Mendes came on to the pitch as Colin Caton looked for an impact from his bench with time running out for Bala to get something out of the 2nd vs 3rd clash.

He got exactly what he wished for when Mendes delivered a sublime cross into the back post and was headed in by who else, but Chris Venables!

The captain drawing us level and giving us the momentum to push for a winner with the super-sub’s pinpoint cross helping Bala break the Flint resistance.

Both sides pushed for the winner with 15 minutes left following Venables’ equaliser, and Flint almost had an immediate response when Jake Phillips received the ball in front of the Bala goal, with a free shot at grabbing potentially the winner with only Lloyd to beat but could only drag his shot wide as a huge chance for the hosts went by.

It was Bala though who had their tails up and looked likely to complete the turnaround late into the game, with substitutes Mendes and Chris Sang having a positive impact in the final third.

It was Sang’s turn to make his impact from the bench, and he did exactly that when his display of individual magic on the wing saw him take on his man and whip a cross into the awaiting Edwards.

The former Wales international volleying the ball home as Bala clinched victory in the last minute having fought back from a goal down.

The win sees Bala climb above Flint into 2nd, the Lakesiders now sitting four points behind the league leaders TNS.

The Lakesiders will be in action again on Saturday, October 9, as they take on Cefn Druids at Maes Tegid, with kick-off at 2:30pm.

TNS ease to win over Aber