Barry hold on to secure win for Chesterfield in 500th game 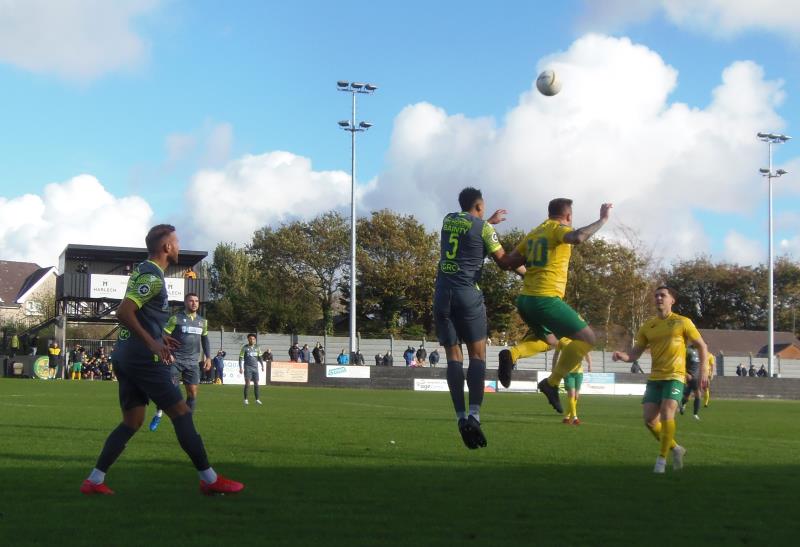 BARRY TOWN United ensured that Gavin Chesterfield’s 500th game in charge of the club was a successful one as they beat Caernarfon Town 2-1 at The Oval on Saturday (Oct 30).

They started well as Jordan Cotterill saw a shot saved before also sending a free kick into the arms of the keeper.

Barry were rewarded for their good start on eleven minutes as Luke Cummings whipped the ball into the box for Kayne McLaggon who headed in to the bottom corner.

The away side wanted a penalty soon after as Rhys Kavanagh went down in the box but the referee waved away the appeals.

Caernarfon looked to get themselves back in the game and after a scramble in the box on 16 minutes a shot was cleared off the line by Evan Press.

Callum Sainty then got on the end of a Cummings’ throw in but he headed just wide.

The hosts then had a corner shortly after the half hour mark but the header went over the bar.

They were rueing that missed chance four minutes later though as Barry doubled their lead.

After Sainty showed great endeavour to win the ball back in midfield, Clayton Green burst forward and played through Jordan Cotterill who fired the ball past the goalkeeper.

Barry held on to their two-goal lead until the break but it was the home side who started brightly in the second half.

A cross was whipped into the box but it bounced out off the top of the crossbar.

They were then awarded a penalty a minute later as Callum Sainty was adjudged to have brought down the Caernarfon player.

Mike Hayes saw his penalty saved by Mike Lewis but Sion Bradley reacted quickest to tap in the rebound.

Caernarfon were now looking to get themselves level and on the hour mark they had a great chance but after the ball was cut back they fired the ball over the bar.

At the other end Cotterill crossed for Rhys Kavanagh but he also sent his effort over the bar.

There was a chance for the home side two minutes later as the action went from end to end but the ball was again sent over the bar.

Kavanagh then showed good footwork to play in McLaggon but his shot was well saved by the Caernarfon keeper.

The same player then went one-on-one with the keeper moments later but it was the Polish shot-stopper who again made the save to keep his side in it.

McLaggon and Kavanagh then had further chances to increase Barry’s lead but it remained 2-1 to the visitors as three minutes of time were added on.

Barry held on to ensure Gavin Chesterfield’s 500th game would be a memorable one.

Follow Team Wales in the Commonwealth Games on S4C