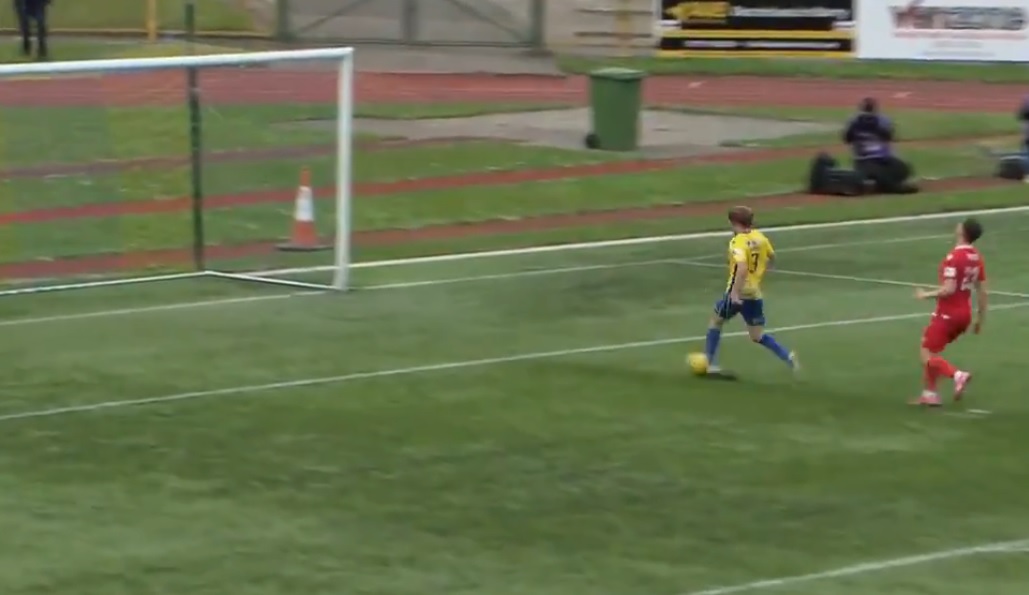 BARRY TOWN UNITED confirmed their place in the Championship conference after they thumped Bala 6-2 on Saturday (Mar 27).

Bala had already secured their spot in the conference and perhaps had one eye on the second phase as Barry ran riot.

Colin Caton was celebrating his 700th match in charge of the Lakesiders, but it won’t be one that will live long in the memory.

It was, however, a good start for the visitors as Chris Venables headed in from a free kick to make it 1-0.

Venables’ header broke the net and play was halted while it was repaired.

Barry weren’t behind for long though as on 12 minutes, Jordan Cotterill sent a corner in from the left and it was flicked on to the returning Kayne McLaggon who headed home.

Three minutes later, the home side had turned the game on its head as Chris Hugh sent a free kick into the box and Evan Press rose highest to nod the ball in and make it 2-1.

Bala were very nearly back in the game on 22 minutes but a header was excellent tipped over by Barry keeper Mike Lewis.

McLaggon then got on the end of a long ball and laid it off for Cotterill but he shot straight at Alex Ramsay.

Bala attacked at the end of the first half but it remained 2-1 when the half time whistle went.

Six minutes into the second half it was 3-1 to the home side as a through ball for Chris Hugh split the defence but a touch from the Bala defender took the ball away from the keeper who had come out to clear and it gave Hugh an easy task to tap the ball into the net.

Bala continued to look for goals and they almost got one back when Jack Mackreth shot toward goal but Barry keeper Mike Lewis made a good save to send the ball out for a corner.

The hosts were close to a fourth soon after when Jordan Cotterill’s shot was saved but the ball went under the Bala keeper before Shaun Kelly cleared the ball off the line.

On 66 minutes it was 4-1. Cotterill was involved again as he saw his shot saved but the ball bounced up for Kayne McLaggon who acrobatically finished despite the best attempts of the Bala defender to clear it.

Five minutes later, Barry had a fifth as McLaggon saw another shot saved but this time the ball fell to the feet of Evan Press who had time to pick his spot before firing home.

That wasn’t the end of the scoring and to their credit, Bala pulled one back three minutes later as Kieran Smith tapped in to make it 5-2.

With nine minutes to go Barry scored their sixth and one of the best goals of the match.

Curtis Hutson, who had recently returned to the club, controlled the ball well and kept the ball in the air with three more touches before firing in on the half volley.

Mackreth saw a shot go wide for Bala before the hosts nearly added a seventh.

Hutson cut in from the left and laid the ball off for Press who shot just wide. That was the end of the action as Barry saw the game out to seal an excellent win.