Home > Sport > Bont up to fifth with win over Flint
Football 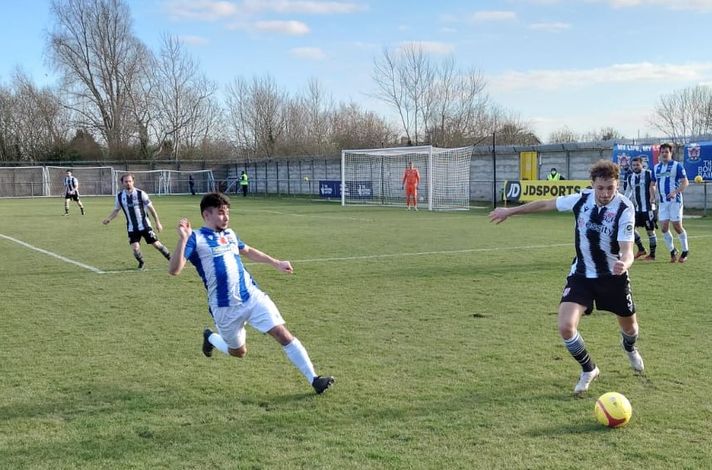 PENYBONT moved up to fifth place in the JD Cymru Premier on Saturday, March 6, as they earned a 1-0 win away at Flint Town United.

The Bont thought they had scored just two minutes in when Sam Snaith flicked the ball on for Kosta Georgievsky who put the ball in the net, only to see the offside flag raised.

That didn’t stop the visitors, however, and, on 11 minutes, they were rewarded for their early pressure.

Georgievsky did well to find Mael Davies who crossed into the middle for Nathan Wood whose shot bounced in to give Bont the lead.

In their first incisive attack, Flint thought they had a strong shout for a penalty, when Mark Cadwallader ran into the box, and appeared to be clipped from behind, as he bore down on keeper Ashley Morris, but the referee remained unmoved by the home side’s pleas.

Penybont’s Kostya Georgievsky had a one on one with Rushton on 20 minutes, when he received the ball from what initially looked like an offside position, but the linesman kept his flag down. The Flint stopper distinguished himself with a good blocking save to avert the danger.

Rob Hughes looked Flint’s most likely outlet as an attacking force, and he weaved into the box on 25 minutes, but Morris cleared his cross, as he looked to deliver the ball into the danger area.

A few minutes later, Jordan Buckley almost got on the end of a through ball, but Morris was alert to the danger once more, and raced out of his area to clear the danger just ahead of the Flint striker.

Hughes then tried his luck with a free kick from 22 yards out, but his effort could only find the roof of the net.

In the second half, Bont successfully closed the game down, and chances for both sides were few and far between.

The final ball was all too often lacking in quality from the Silkmen, when they did manage to penetrate the final third, and Morris remained largely untroubled.

Hughes embarked on one of his trademark mazy runs just after the hour mark, and worked his way into the box, before slipping the ball towards Cadwallader, but Morris just beat him to it, and once again snuffed out any potential danger.

The result leaves Flint tenth in the table and they only sit outside the bottom two on goal difference.

On Tuesday, March 9, Flint Town host second placed Connah’s Quay Nomads while Penybont are away to Barry Town United, both games kick off at 7:45pm.