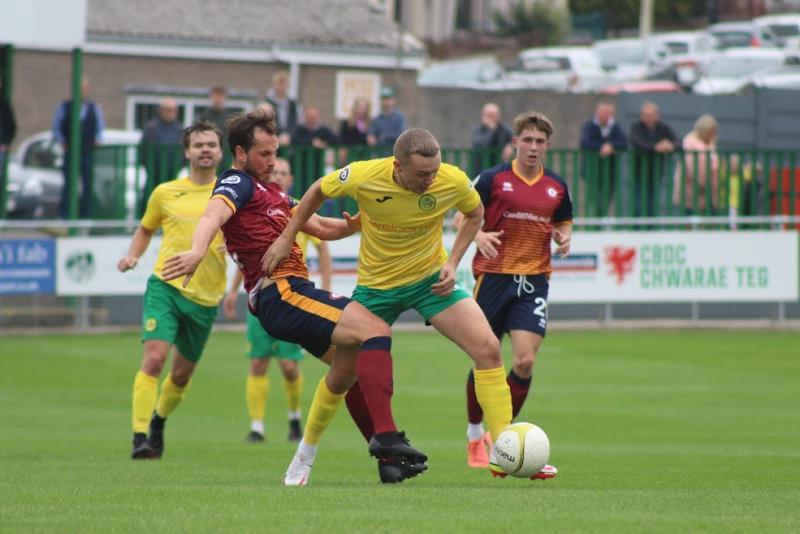 CAENARFON TOWN moved up to fourth place in the JD Cymru Premier as they beat Cardiff Met 2-0 at the Oval on Saturday (Sept 18).

The Archers were on the crest of a wave after five consecutive wins in all competitions and were two places above Caernarfon before the start of play but, despite giving it their all, they were second best to the confident hosts who, despite not being at their best, worked hard to clinch the three points.

The first half was a much more enjoyable affair than the second, with good pace and flow to the action and the Cofis certainly looking the more ominous in attack, where Darren Thomas, Rob Hughes and Mikes Hayes looked sharp and dangerous.

Caernarfon could have gone ahead just two minutes into the action when a long clearance from Jakub Ojrzynski found Rob Hughes thirty metres from goal, and he did well to glide past two Met players before putting Thomas through in the box. The little magician struck from an acute angle, but saw his effort glide past the far upright with goalkeeper Alex Lang beaten.

The hosts continued to boss possession for the next ten minutes and, in the eleventh minute, there was a quick glimpse of what was to come when a Rob Hughes free kick was half-cleared by the Met defence, and the ball landed at the feet of Daniel Gosset, who struck first time but could not keep the ball from rising over the bar.

Ojrzynski was forced into a smart save a minute later after an attempted clearance from Gruff John struck Joseph Evans and was headed for the roof of the net until the Caernarfon keeper tipped the ball over the bar.

The opener finally arrived for Caernarfon in the twenty eighth minute and was a virtual re-run of an earlier free kick. This time, Hughes’ set piece effort beat the defensive wall but was saved by a diving Lang, the ball was retrieved and sent back to the box by Cartwright and Gosset struck first time into the bottom left hand corner of the net, his third goal of the season.

Ojrzynski rescued Caernarfon for a second time three minutes later as he got down smartly to deny Harry Owen and that, really, was just about the final goalmouth action of the first period, with the visitors finishing strongly without looking threatening.

The hosts doubled their lead nine minutes after the restart and it was a goal to cherish for Mike Hayes, who opened his account for the season with a superb solo effort. There seemed little on when Thomas broke from defence, but he found Hayes with a well weighted pass and the Town number, thirty five metres out, raced past his marker and around the onrushing Lang before finishing into an empty net.

The visitors upped their game after this setback whilst Caernarfon seemed content to sit back and let their opponents play in front of them. There was only one more real near miss on the hosts goal, and this was dealt with by the impressive Ojrzynski.

For Caernarfon, Thomas and Hayes were close to adding a third goal but the score remained 2-0 to the hosts and, despite the relative closesness of the scoreline, it ended up a comfortable enough afternoon for Huw Griffiths’ side.

The Cofis have two cup matches to look forward to in the next week. On Tuesday they travel to Newtown for a Nathaniel MG Cup tie, whilst on Friday they host Prestatyn for what promises to be a thrilling Welsh Cup fixture.

TNS extend lead at the top

Day of Hockey and Netball internationals on S4C