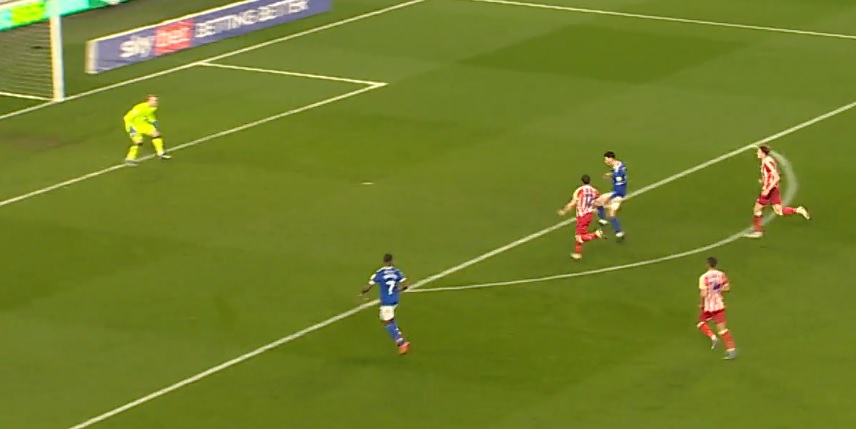 Kieffer Moore had a late chance for Cardiff

CARDIFF CITY and Stoke City settled for a point apiece on Tuesday night (March 16), as their game ended in a 0-0 draw.

The Bluebirds have dropped to ninth in the table and they are now six points off sixth-placed Barnsley.

Mick McCarthy made three changes to his side following Saturday’s last gasp defeat to Watford.

Stoke recalled Welsh keeper Adam Davies to their starting line-up and he was called into action early on as he saved Leandro Bacuna’s effort.

Steven Fletcher then came close for the visitors but Bluebirds keeper Dillon Phillips, at fault for Watford’s winner on Saturday, made a good save. The rebound though fell to Jordan Thompson but Perry Ng made an excellent clearance to keep his side level.

Aden Flint was then guilty of giving the ball away to Fletcher who found Nick Powell but he curled his effort wide of the goal.

Bacuna again tried his luck from distance but Davies was again able to make the save.

The home side had a chance before the break but a free kick into the box just evaded Sean Morrison.

In the second half, a long throw from Will Vaulks was not dealt with and the ball fell to Kieffer Moore but the Cardiff striker could only send his effort over the bar.

Vaulks volleyed wide with twenty minutes to go before former Chelsea player John Mikel Obi saw an effort saved by Phillips who had been a spectator for large parts of the second half.

Moore was played in with ten minutes to go but Davies did well to come out and smother the ball.

Three minutes later, Moore was in again as he latched on to Tom Sang’s pass and he lifted the ball over the keeper but watched on agonisingly as his effort went wide.

Another long throw from Vaulks in the dying moments caused panic in the Stoke box as Davies flapped at the ball but it again went wide of the far post.

Both sides settled for a point which did little to improve their play-off prospects.

Cardiff will though have been pleased to have got a positive result ahead of Saturday’s (March 20) South Wales derby with Swansea City.