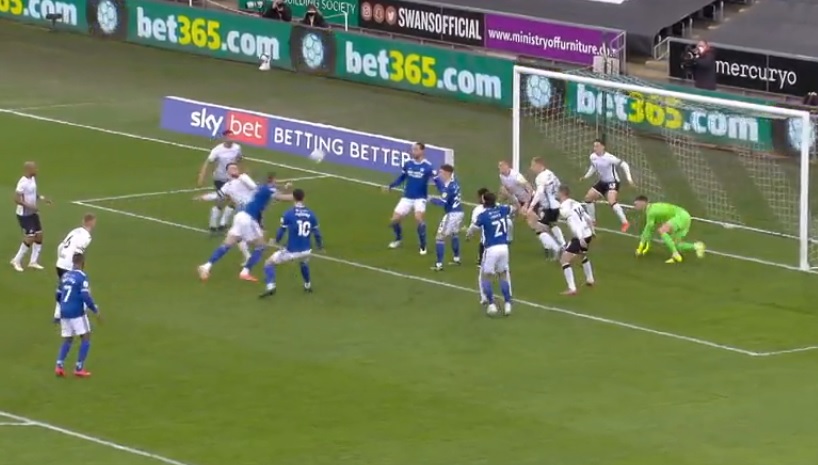 CARDIFF CITY held off second half pressure from Swansea City on Saturday (March 20) as they sealed victory in the south Wales derby.

The Swans had won the reverse fixture at the Cardiff City Stadium and were hoping to become the first side to ever to the double over their rivals.

It wasn’t to be though as Aden Flint’s early header was enough to separate the two sides to give the Bluebirds an important win.

The hosts had an early chance as Conor Hourihane was fouled on the edge of the box and it was Hourihane who shot towards goal but Cardiff keeper Dillon Phillips got a hand to it to ensure the ball went wide and into the side netting.

Moments later a long throw from Will Vaulks caused panic in the Swansea box and after an initial effort was saved, the rebound fell to Aden Flint who powered his header home to give the Bluebirds the lead.

They could have made it 2-0 when Freddie Woodman inexplicably passed the ball to Kieffer Moore but after he rounded Woodman, the striker’s effort was weak and the Swans were able to stop the ball going in.

In the second half, Harry Wilson had a chance as he cut inside in the box but his curling effort as saved by Woodman.

With twenty minutes to go, Swansea had their best chance to level the game as Connor Roberts sent a corner into the box which Andre Ayew headed down but onto the base of the post.

Morgan Whittaker tested Dillon Phillips with a shot from outside the box but the Cardiff keeper palmed the ball away.

Whittaker then had a late double chance for the hosts but he saw a shot blocked before his follow up went wide of the left hand post.

Mick McCarthy said he was ‘delighted’ with the win while Swans boss Steve Cooper was left scratching his head having seen his side play some good football but fail to come away with anything to show for it.

The win for Cardiff moves them up to eighth place in the table and they are now four points off the play-off places.

Swansea remain in third but they are now six points behind second place Watford. The Swans do have a game in hand on Watford but they also have Brentford and Barnsley now breathing down their necks.

After the international break, the sides will return to action on Friday, April 2, with Cardiff hosting Nottingham Forest while Swansea travel to Birmingham City.