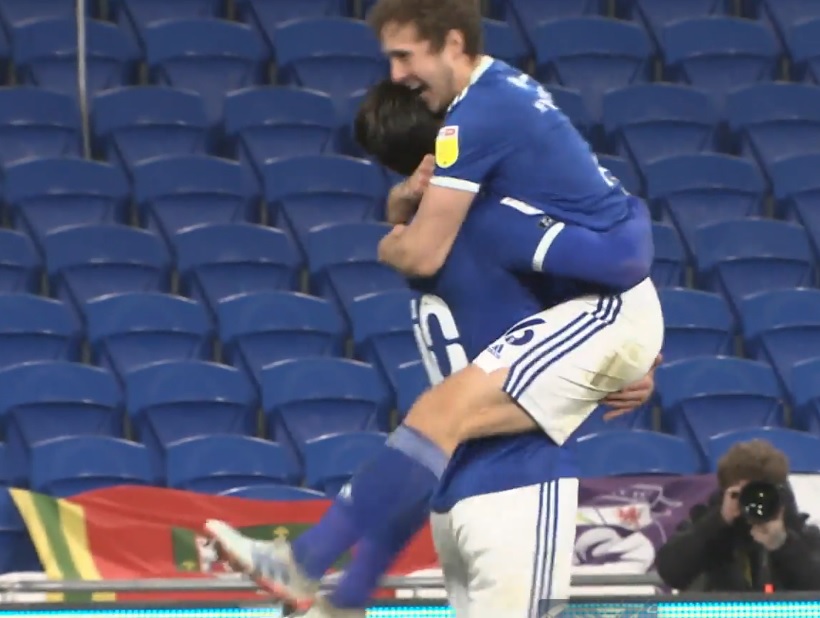 CARDIFF City moved back into the Championhip play-off places on Tuesday night (Mar 2), as they thumped Derby 4-0.

It is the second time in as many home games that the Bluebirds have hit four goals and the win extended their unbeaten run to ten matches.

After a tense opening ten minutes, Cardiff had the first real chance of the game as Derby defender George Edmundson could only head into the path of Kieffer Moore but the Welsh striker could only fire over the bar.

The home side then felt they should have had a penalty when Sheyi Ojo’s shot appeared to hit the arm of Matt Clarke but after the appeals were waved away, Perry Ng crossed for Moore but he headed wide.

Midway through the first half the Bluebirds took a deserved lead when Joe Bennett crossed from the left for Leandro Bacuna in the box who finished well to make it 1-0 and score his first goal of the season.

Sadly for Bennett, he was to go off eight minutes later with an injury.

Moore and Bacuna both had chances to add to the scoring but Derby keeper Kelle Roos ensured it remained 1-0 to the Bluebirds at half time.

Any hopes the Rams had of equalising in the second half were soon dashed as Will Vaulks’ corner into the box found Moore who headed in for his sixteenth goal of the season.

That goal came just three minutes into the second half and just eight minutes later the Bluebirds all but ensured the points with a third goal.

Ojo laid the ball off for Bacuna on the edge of the box and he curled in an excellent shot for his second goal of the evening.

The home side thought they had a fourth soon after but Ojo’s effort was ruled out for offside.

With time almost up, Cardiff put the icing on top of a perfect performance as Ng closed down the Derby defender and let the ball run to Vaulks who fired an unstoppable effort into the roof of the net to make it 4-0.

Mick McCarthy’s men certainly seem full of confidence right now and they will look for another positive result when they travel to Huddersfield on Friday, March 5.

With Bournemouth and Barnsley both playing on Wednesday night, the Bluebirds could see themselves fall out of the play-off places once again but they will not mind as long as they keep their unbeaten run going.

Follow the Under-20 Six Nations on S4C and BBC Cymru