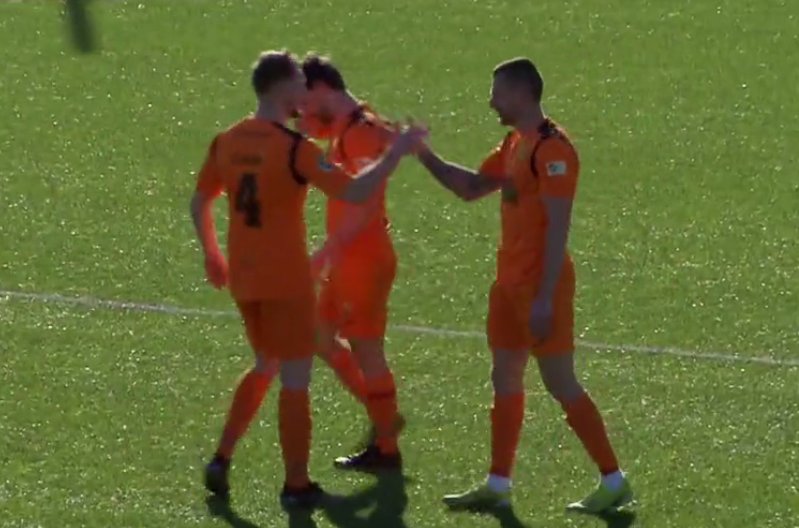 CAERNARFON TOWN began phase two of the JD Cymru Premier season in fine style with a 3-0 win over Penybont.

Before the match, Caernarfon manager Huw Griffiths had declared that his side have the players to challenge everyone in the league and they proved it.

This was the third time Town had visited the SDM Glass Stadium this season and both matches had been very tight affairs, the first a one all draw in the league, and the second saw the hosts win their Welsh Cup tie on penalties after a goalless draw.

This one proved just as tight, but Caernarfon showed a ruthless touch in front of goal that bodes well for the remainder of the season.

The hosts started the brighter of the two sides and Town stopper Jakub Ojrzynski pulled of a super save to tip over his bar a twenty two yard free kick from Kayne Owen.

The next opportunity fell to Caernarfon’s Darren Thomas, who saw his left foot effort from sixteen yards fly over inches over the woodwork.

Keane Watts should have put the hosts ahead in the fourteenth minute when he intercepted a back pass from Town captain Dion Donohue to Ojrzynski, but he blasted the ball over the target from six yards.

Caernarfon went ahead less than a minute later after Sion Bradley put Darren Thomas through, and the little magician hit his left foot effort across Ashley Morris and into the bottom corner of his net. It was an excellent finish by Thomas, and the perfect start for the visitors.

Iwan Cartwright found himself in a great position on the half hour mark when he met a floating Thomas free kick, but he mistimes his header and it flew wide of the target.

Mike Hayes, who had scored three times in the preceding two matches, picked the ball up on the left side of the area and, at the edge of the box, he struck for goal, the ball deflecting off MacDonald on the way into the net.

The goal knocked the hosts’ confidence and they certainly seemed to struggle in creating any sort of reply, although Sam Snaith should have halved their deficit on the stroke of half time, managing only to strike the woodwork with his header from six yards.

As expected, Penybont dominated possession for large periods of the second half but Caernarfon’s defence stood firm and it must be said that the Cofis managed the game well.

The hosts created a number of half chances, and Snaith struck the post on eighty one minutes from an cute angle. Dan Jeffries headed straight at Ojrzynski from six yards minute later and it was Caernarfon who had the final say.

Having been introduced as a late substitute, Rob Hughes put Hayes through in the eighty fourth minute, and the striker made no mistake as he planed the ball firmly past Morris to score his second of the match, and secure the points for the rampant Cofis.

Caernarfon are back in action next Friday when they take on Newtown at the Oval.