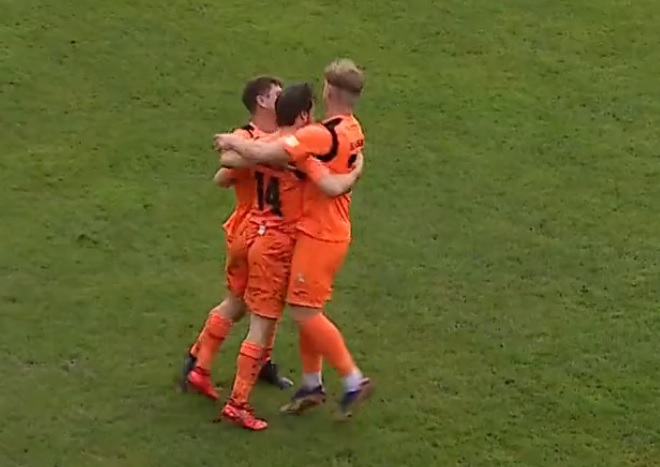 CAERNARFON travelled to the Bridge Meadow Stadium on Saturday (Nov 20) with a threadbare squad and produced an outstanding performance to beat Haverfordwest by two goals to one.

With six first team players unavailable due to injury, suspension and private matters, Huw Griffiths reshuffled his starting eleven and his players responded with a fine win.

The Cofis were on the front foot from the off, and could have gone ahead in just two minutes, as home goalkeeper Lee Idzi pulled off a superb save to tip a Darren Thomas effort over the woodwork.

It was initially end to end action, as Jack Wilson was frustrated to see his goalbound shot for the hosts deflected wide of its target whilst, in the sixth minute, Cai Jones got on the end of a Mike Hayes cross, but saw the ball cannon off the upright.

Hayes himself was denied in the ninth minute when Idzi saved again and Daniel Gosset’s strike from the edge of the box sailed over the bar.

Touray Sisay should have done better for the hosts in the fourteenth minute but his effort ballooned hopelessly off target when well placed.

Caernarfon continued to dominate after the helter skelter opening and, although Ben Fawcett hit the upright from fifteen yards, it was the visitors who continued to knock on the door.

Idzi kept out a Gosset effort in the twenty sixth minute but was helpless on the half hour mark, after Noah Edwards picked the ball up five yards inside the hosts half, before running into the box and placing his low shot across the goalkeeper and inside the bottom left hand corner of his net.

It was the least Caernarfon deserved and they kept their slender lead until half-time.

The second half was a slightly less manic affair, although no less entertaining.

Idzi pulled off a super double save on the hour mark, to deny Darren Thomas and then a follow up from Mike Hayes’.

Caernarfon doubled their lead just two minutes later, after a Thomas cross cross from the right had resulted in a scramble in the penalty area and, having seen the ball bounce off the bar and blocked on the line, the Cofis were ahead when the ball fell at the feet of Cai Jones, who finished from five yards.

The goal seemed to have an effect on the hosts, who seemed to stir a little and enjoyed seeing more of the ball.

Mason Jones-Thomas pulled a goal back for Haverfordwest in the sixty eighth minute but most of their attacking efforts were long and direct, which perfectly suited Town’s veteran defender, Steve Evans.

Town’s defence held firm for the final few minutes, and they deservedly secured an important away victory that keeps them in seventh position in the Cymru Premier League.

Lakesiders back to winning ways with comfortable victory over Flint