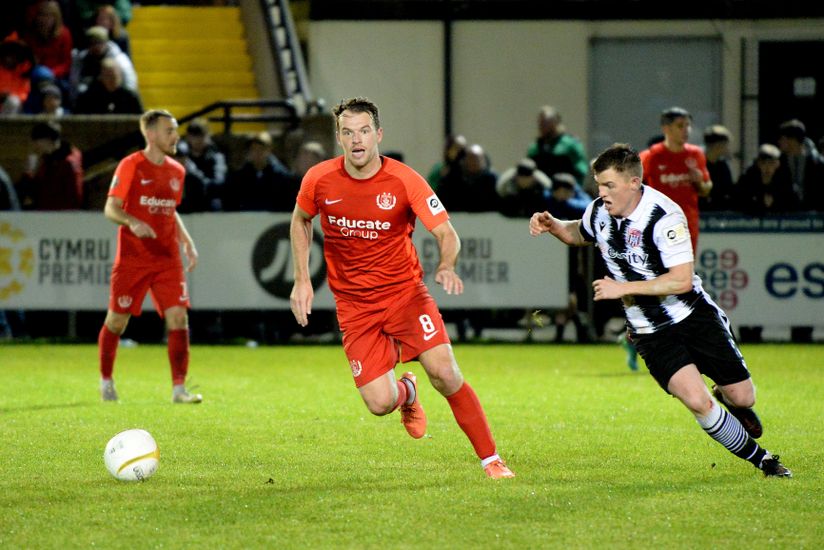 The Nomads reached this derby fixture on the back of a 4-0 victory against Trefelin BGC. This game is a well-known derby for Welsh football fans, and it certainly lived up to its intensity and anticipation.

This time out, The Nomads looked for a victory following a 2-0 defeat to Newtown last Tuesday night. This would give Craig Harrison his first victory as Nomads’ Head Coach and what better fixture for looking to win then against rivals, Flint Town.

As we have seen from The Nomads’ recent games, a pressuring start was present as long balls from Ollie Byrne and Neal Eardley resulted in rising headers from George Horan and Jamie Insall, but the referee had deemed a foul on the ‘keeper for both encounters.

In the 13th minute, we came so close to making it 1-0 as Insall managed to fly clear in the Flint box but his low drive sailed onto the post and back out for the Flint duo of Maher and Hart to clear.

A minute later and The Nomads hit the post another time as Kris Owens’ free kick nearly caught out Jon Rushton in the Flint net but the woodwork was his saviour as the shot smacked off the inside of the post resulting in yet another series of corners and throw-ins which gave The Nomads the better of the possession and chances in the first 15 minutes.

In the 20th minute, The Nomads came close again as Insall’s 25-yard strike only just flying over the top. Two minutes later, another shot was denied by the post as Eardley collected the ball from a short corner and laid it off to Kris Owens whose 20-yard curling effort came back off the post which Insall faced a scramble to get to which Flint eventually cleared.

The breakthrough for The Nomads came in the 28th minute as they played well around the centre and eventually Kris Owens found space for the cross and spotted an unmarked Jamie Insall who delivered yet again for The Nomads with a low header being too much for Flint ‘keeper Jon Rushton to keep out, as The Nomads went 1-0 up in the derby.

Remarkable scenes came in the 33rd minute as Rushton proved his worth for Flint as shots from John Disney, Jamie Mullan and Callum Morris were fired at him with force in the space of 10 seconds. Like Tuesday night against Newtown, we saw a series of corners established which The Nomads did create from but caused no trouble.

Flint did eventually create as Jack Kenny delivered a cross into former Nomads defender Ben Nash and as his header looked to be creeping into the top right corner, Oliver Byrne made an astonishing stop to tip it wide and ensure The Nomads were still in the lead.

This was the last major activity for the first half as The Nomads continued to deliver crosses and keep the fierce pressure on their rivals. The Nomads went into the break with a 1-0 lead and looked to carry their impressive display into the second half.

The impressive display certainly continued as two minutes into the second half came The Nomads’ second goal of the evening coming from number 7 Jamie Mullan. Declan Poole flew down the wing and looked to pull back for Insall and as Flint tried to clear, their efforts fell to Mullan who struck into the bottom right corner to give The Nomads a two goal lead in the derby.

The Nomads were consistent in their efforts in the next period of the game as Callum Morris came close in the 55th minute as Kris Owens delivered a beauty of a cross to the back post where Callum Morris’ header was saved well by Jon Rushton as he pushed the header onto the bar to keep the score at 2-0.

As the game reached the hour mark, we saw dominance sustained again from The Nomads as shots as Aeron Edwards and Declan Poole made the Flint defence work and work to try and get their side back in the game, but The Nomads kept haltering every counterattack Flint tried and controlled the ball comfortably in every area of the pitch.

Flint did eventually come up with a creative opportunity to give themselves a chance of getting back in the match, but Jack Kenny saw a chance go to waste as his close-range effort flew past Byrne in the Nomads goal.

In the 76th minute came a pivotal moment in the game as Ben Nash received a second yellow card for a foul on Jamie Insall and referee Rob Jenkins had no hesitation and showed a second yellow to Nash. This would ensure The Nomads dominated even more and could see the game out in their favour from here.

Craig Harrison made two substitutions in a matter of minutes as Jamie Insall and Aeron Edwards were replaced by Aron Williams and Ryan Harrington as The Nomads looked to provide fresh legs in order to secure the win over their rivals.

The final few minutes saw The Nomads calmly passed the ball around side-to-side trying to create a chance that would be certain of a goal and trying to keep the worthy clean sheet safe for our outstanding defence.

This was the last action of the match, and The Nomads gained their first victory under new manager Craig Harrison, and they now have their place in the last eight of the JD Welsh Cup. Whoever The Nomads are drawn against, The Nomads will look to continue their impressive Cup performances this season and look to add to their trophy collection.

Next up for The Nomads is an away day at Cardiff Met who sit sixth in the JD Cymru Premier.

Follow the Under-20 Six Nations on S4C and BBC Cymru