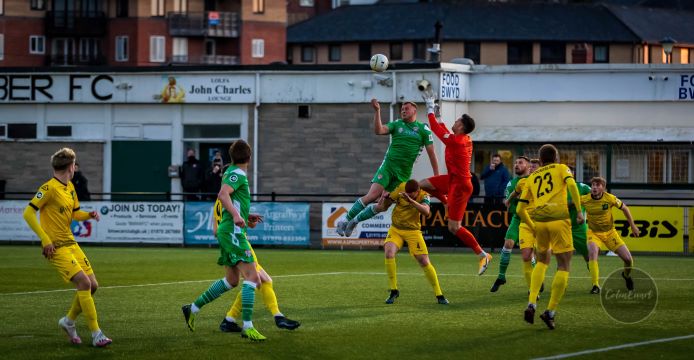 FLINT TOWN UNITED made it three wins from three in the second phase of the JD Cymru Premier on Friday night as they beat Aberystwyth Town 1-0 at Park Avenue.

A second half Josh Amis strike was enough to give Flint victory and they now sit third in the Play-off conference, behind Newtown and Haverfordwest County.

The game started with neither side able to get on the ball and dictate proceedings, with niggly fouls from the home side halting Flint’s flow.

But it wasn’t long before the away side created their first chances. Josh Amis, fresh off opening his goal-scoring account on Tuesday night, was slipped in down the right channel by Callum Bratley after some neat footwork, although the big striker’s low shot across goal was saved by Connor Roberts, who was making his return from suspension in the Aber goal.

Minutes Later, Conor Harwood weaved between the Aberystwyth backline and his effort across goal was cleared off the line.

Jon Rushton had little to do throughout the first half but when called into action 25 minutes in, he got down well to comfortably gather a header from a free kick.

The biggest chance of the half fell on the half hour mark. Ben Maher and Bratley linked up well down the right, and the latter broke into the box only to see his effort saved low down by Roberts – a carbon copy of the Amis chance earlier in the half.

On 35 minutes another chance came and went, this time following a nice exchange of passes between Maher, Bratley and Harwood, a shot from the edge of the box ended up being blocked.

Then, on the stroke of half time, some good work on the right hand side ended with a cross to the back post. Harwood was lurking but his shot was blazed over the bar. If Flint had taken their chances by this point, the game would’ve been all but over.

The chances didn’t dry up in the second half either. Just 5 minutes into it, Bratley found Mark Cadwallader with an inch perfect through ball, but again, the finish lacked decisiveness and Aberystwyth escaped unscathed.

Midway through the second half, Flint won a free kick on the edge of the Aberystwyth box after a dangerous challenge. Maher stepped up and was inches away from finding the top corner.

The lack of pressure applied by the hosts and the multitude of chances created by the visitors finally paid off, as the breakthrough was made 18 minutes from time.

Just as it looked as though missed chances may prove costly, an in form Amis latched onto a Harwood flick on near the halfway line. He showed strength and speed to evade the chasing defenders before sliding the ball into the far corner, as calm as you like.

Aberystwyth upped the ante as they looked to score an equaliser late on. A ball was stood up to the back post and after having had very little to do all game, Rushton rose to the occasion and made a fantastic save to deny Jonathan Evans and preserve Flint’s lead.

That was the only real scare, and the boys in Black and White held out to secure another vital three points and earn their third successive win and clean sheet.

In doing so, they leapfrogged their opponents and will look to carry on in the same manner against Newtown at home on Tuesday, April 20.