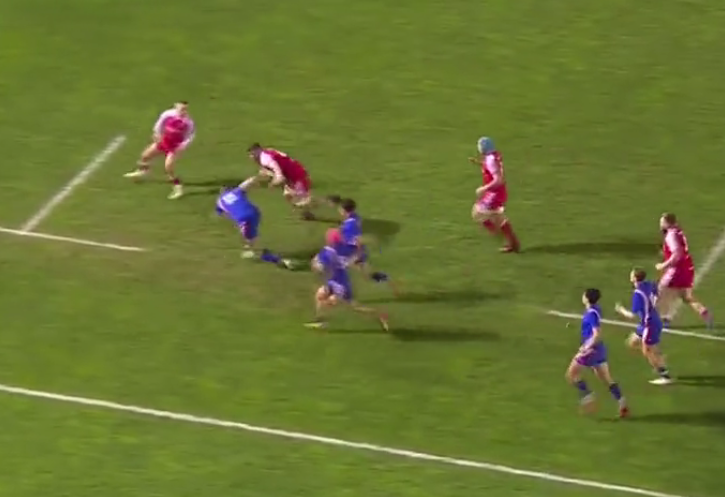 FRANCE kept alive their hopes of winning the Six Nations Under 20 Championship with a bonus point win over Wales on Thursday night (Mar 10).

France lead 20-15 at half time in what was a breathless first half at Parc Eirias and they added four more tries in the second half to seal a 15-47 win.

Wales hit back though and were awarded a penalty try after a driving lineout was collapsed.

That also saw France reduced to 14 men and four minutes later Benji Williams touched over in the corner to get Wales firmly back in the match.

France saw a second player sent to the sin-bin meaning they would finish the first half with 13 men.

The visitors added a late penalty in added time to give them a narrow five-point lead at the break.

At the start of the second half, Wales were penalised for not driving straight at the scrum and the French opted to kick at goal. The kick was successful and France lead 15-23.

Still with 14 men on the field, France pushed forward again and Connor Sa went over for his second try of the game. The conversion was successful and France’s lead grew to fifteen points.

As the game ticked on to the hour mark Wales pushed forward and France were guilty of giving away a number of penalties. However, France were able to turn the ball over and clear.

With eight minutes to go France scored their bonus point try as a pass was intercepted by Enzo Reybier who ran on to score under the posts and the conversion from Barre made it 15-37.

In the closing minutes of the second half Simon Tarel scored after a mistake from Wales. Barre was unsuccessful with the conversion.

There was still time for one more try as Max Auriac kicked ahead and touched down. Barre couldn’t add the conversion but it did not matter as France secured a 47-15 win.