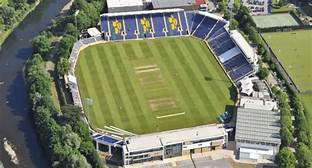 A CALL has been made for the Welsh Government to revisit its events guidance which sets out how many people can attend sporting fixtures.

It had been announced by the First Minister that crowds of up to 10,000 would be allowed to return to stadia in Wales subject to two-metre social distancing.

As a result of this, an independent assessment was done on Glamorgan Cricket Club’s Sophia Gardens which confirmed a maximum safe capacity of 2,892 spectators.

However, the latest Safe Events guidance issued by Welsh Government on Friday, June 11, confirms only members of the same household will be permitted to sit together and all other group ticket buyers will be required to sit two metres apart.

Consequently, the Club is anticipating that the capacities for all of its fixtures, including Vitality Blast matches and the IT20 games between England and Sri Lanka on Wednesday 23rd and Thursday 24th June will be significantly lower on each match day.

Chief Executive Hugh Morris said: “We have no option but to comply with the Welsh Government legislation which is likely to mean an actual capacity of around 1,500 spectators at our stadium for as long as social distancing remains at two metres in Wales.

“In effect, for every single match ticket bought, we are losing the nearest 11 seats to accommodate the social distancing legislation as fans who have bought in groups, and not from the same household, will be required to sit two metres apart.

“Some of the many thousands of cricket fans who have bought tickets for matches in Cardiff this summer will be frustrated and disappointed not to be able to attend these matches.

“Obviously the situation creates many logistical and financial challenges for the Club, which we are currently working through to ensure we are able to welcome as many supporters as possible within these restrictions.

“We will continue to monitor Welsh Government legislation for our matches later in the summer including the England and Pakistan One Day International on Thursday 8th July and matches in The Hundred competition in late July and August.”

The club has already contacted members and season ticket holders about upcoming games and will communicate with purchasers regarding the status of their tickets for those upcoming fixtures involving Glamorgan and England.

Mr Morris added: “The health and safety of cricket fans remains our number one priority. Recent sports pilots have shown how larger capacity crowds can be achieved safely and we want to work with the Welsh Government to ensure more cricket fans are able to return to Sophia Gardens as soon as possible.”

Responding to a statement by Glamorgan CCC on the impact of guidance issued by Welsh Government on crowd capacity, Welsh Conservative spokesman for sport, Tom Giffard MS said: “This latest events guidance from the Welsh Labour Government makes little sense.

“Six people can meet inside a pub for a drink, yet this guidance only allows members of the same household to sit together to watch a match in the great outdoors at one of Wales’ premier sports grounds.

“Public safety is of paramount importance, but this dramatic inconsistency will have a devastating financial impact on Glamorgan CCC and other sports clubs across Wales who might find themselves in a similar position.

“I fully understand Glamorgan’s frustration with this latest development, and ministers must revisit this guidance and ensure the science is applied consistently across all settings.”