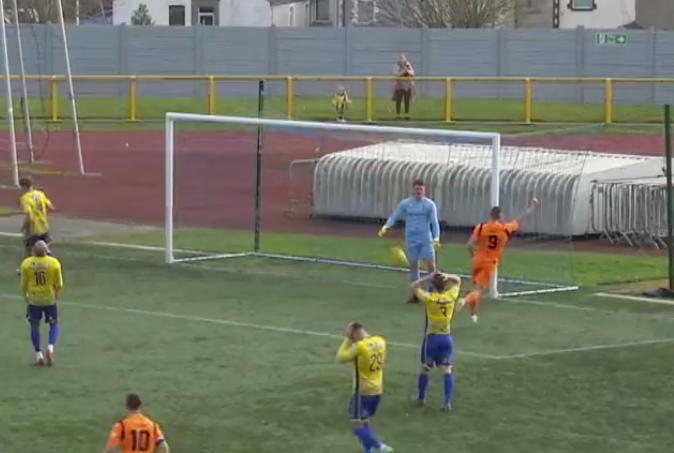 Going into the match, hopes of a top six finish were intact, though very slim due to the goal difference between themselves and Connahs Quay Nomads.

However, off the field activities meant that the Cofis needed the three points to ensure that they remain in pole position to step up and into the Cymru Premier League Conference if required.

Huw Griffiths’ men started well enough, and enjoyed plenty of early possession. A neat link up in the fifth minute between Cai Jones and Mike Hayes, ended with the latter robbing the ball off a Chris Hugh and strucking it past Kelland Absalom and into the bottom far corner of his net.

It was the perfect start for the Cofis and, with the wind in their faces, they then faced up to plenty of home possession.

Kayne McLaggon should have put the hosts level five minutes later when he got on the end of a dangerous Cotterill cross but missed the target from three yards.

The striker also threatened just before the half hour mark when he dribbled into Town’s box but hit the ball straight at Caernarfon stopper Jakub Ojrzynski.

The Cofis were depending on resolute defending and quick breaks upfield to hurt their opponents and the ever dangerous Darren Thomas broke from defence in the thirty second minute, passing two opponents on his way to the edge of the penalty area before hitting his low effort just wide of the target.

Despite their dominance of the ball, Barry were not looking too threatening in and around the box and it took a bit of luck for them to get back on level terms when Cotterrill’s cross in the thirty seventh minute caught the wind and flew over Ojrzynski on its way into the onion bag.

As half time approached Danny Gosset failed to keep his effort on target from the ‘D’ after good work from Hayes and Thomas and, at the other end, Town’s defence handled everything that the hosts could throw at them with relative ease.

With the winds at their backs in the second half, Caernarfon immediately began the half on the front foot, with Thomas seeing an early effort fly over the woodwork.

Town went ahead in the fifty ninth minute when Hayes latched onto an excellent pass from Gosset that split the centre halves, and he took the ball around Absalom and into an empty net.

It was an impressive finish from Hayes, who seems to be picking up some decent form of late.
Barry midfielder Marcus Day was influencing the match more as it went on and he forced Ojrzynski into an excellent full stretch save from in the 66th minute.

Barry failed to get any joy from Caernarfon’s defence, where Iwan Cartwright was immense at centre half, and for Caernarfon Hayes and Rob Hughes both went close to extending their slender lead before Callum Sainty’s header from a corner late on was cleared off the line by Josh Bailey.

Caernarfon held on for an important victory, which sees them finish the first phase in seventh position, and boasting the second best away record in the league behind The New Saints.

Aber earn a point at Bala with stunning free kicks

Ofori and Evans on song as Robins thump Archers

Bala go through on penalties

Disappointing defeat on the road for Aber Town Women