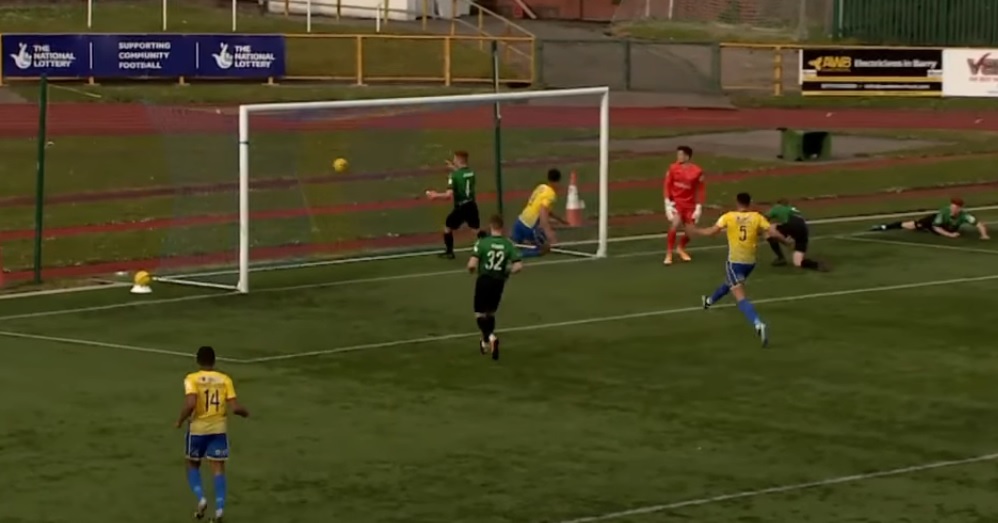 Barry scored late on to seal the win

Aber were boosted by their midweek win over Haverfordwest County and they could have easily come away from Jenner Park with the win.

Naming two changes to the team that beat Haverfordwest County at the death on Tuesday night, Rhys Davies and Owain Jones entered the side for the suspended Mathew Jones and injured Jon Owen.

With the wind creating havoc on crosses and balls over the defence, creation of clear cut chances were few and far between with ex-Seasider Mike Lewis commanding his area well to quell opportunities for Reed and Williams in attack.

With the ball at the home side’s feet, Aber were disciplined in their shape and confident in their pressing, aided by the barked orders of Antonio Corbisieiro and Gari Lewis from the sideline. Despite the youth of Aber’s backline, the central pairing of teenagers Jenkins and Bradford were solid in the air and sound at the feet, as Barry struggled to create in the Aber third.

A clash of heads between Jamie Reed and the Barry left-back Abbruzzese was one of the half’s most noteworthy happenings, as the youngster required some treatment and forced Gavin Chesterfield into a first-half sub.

The spritely Marc Williams created a chance for Franklin shortly before the half with a flick over the Barry defence but the youngster signed from Evesham was beaten to the ball by Lewis, before Barry front-man Nat Jarvis headed over on the stroke of half-time to keep the score level at the break.

The second-half began in-line with the first, as Franklin tested Lewis and later set Reed through the middle for an opportunity well defended.

A number of chances around 52 minutes left Town scratching their heads how the score remained goalless, with some heroic Barry defending before Owain Jones fired narrowly wide when presented the ball from the cluster.

A spell of possession and chances created for the hosts followed, as Roberts saved well from Wharton, Jarvis fired over the bar from 6 yards and Lee Jenkins cleared a dangerous cross from the left. Aber’s earlier dominance counted for nothing as Barry showed their qualities, but the Town defence held strong with all four members contributing well.

As Owain Jones and Jamie Reed made way for Jonathan Evans and Geoff Kellaway, Aber entered the final 15 minutes under pressure but continuing to create for themselves with neat play from the skipper Williams in deeper positions winning free kicks.

The skipper was again involved when Kellaway found Franklin who set the ball for Williams to swing a leg, but his half-volleyed effort was running-track bound.

On 87 minutes, Barry took the lead through a pin-point cross-field ball behind the defence where the on-rushing right-back fired a ball across the area for Nat Jarvis to gratefully prod home. Aber faced another final frenzy for points, having fired very late in the previous two matches.

Two minutes later, Aber had their final opportunity as a scramble of bodies in the home box saw shots blocked and space covered before the ball ricocheted to Geoff Kellaway 15 yards from goal on the right, whose blazing shot struck the near post, to the dismay of everyone in the stadium.

Barry Town are in action on Tuesday night when they travel to play Penybont in a 7:45pm kick off.

A win for Barry would see them cement their fourth place spot whilst also closing the gap to third placed Bala.

Should Penybont pick up the three points, they will leapfrog their rivals into fourth place and will give them further confidence of securing a top six spot.