Newtown hold on to beat Haverfordwest 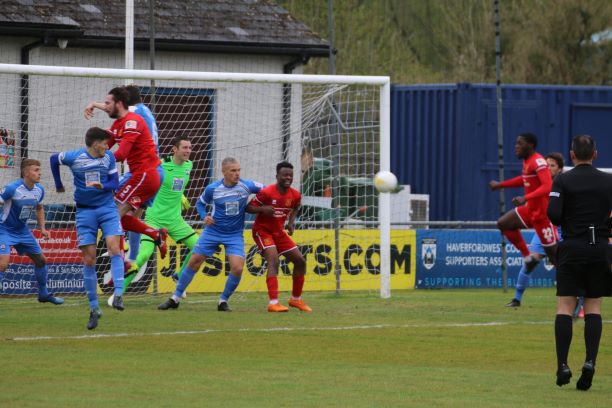 NEWTOWN secured seventh place in the JD Cymru Premier Play-off conference as they beat Haverfordwest County 2-1 at the Bridge Meadow.

The Robins had beaten the Bluebirds 6-1 at Latham Park a few weeks ago but it was much different this time around.

Newtown took the lead as early as the second minute as they won a corner which was sent into the box for Tyrone Ofori who flicked the ball in.

The Bluebirds battled for a way back into the game and came close when the ball was played over the top for Jack Wilson but it just ran away and the Newtown keeper Dave Jones was able to gather the ball.

On 17 minutes, the Bluebirds won a corner which Elliot Scotcher sent into the box and Danny Williams headed in to the far corner to make it 1-1.

Newtown were then given a free kick in a dangerous position which captain Craig Williams sent into the box. Kieran Mills-Evans chested the ball down at the back post and Bluebirds keeper Wojciech Gajda made a good save to push the ball away.

There was another chance for Newtown soon after as Tyrone Ofori saw his header pushed wide by Gajda.

From the resulting corner, Shane Sutton headed home to put Newtown back in front.

The Bluebirds then had a chance to get level but Dan Summerfield sent a rasping drive just over the bar.

With half an hour gone, Alaric Jones sent a ball into the box but Corey Shephard saw his header saved by Dave Jones.

Both sides battled away with Scotcher sending a drive over from the edge of the box.

However it remained 2-1 to the visitors as the half time whistle went.

Newtown had a great chance to extend their lead at the start of the second half as Williams sent a corner into the box but Mills-Evans headed just wide.

The Bluebirds looked to get back in the game but despite getting into some promising positions, they were unable to test the Newtown keeper.

With twenty minutes to go a Bluebirds throw was headed on to the back post. Danny Williams headed towards goal and thought it had gone over the line but Dave Jones made a fantastic save to keep Newtown ahead.

Sub Cameron Keetch then had a great chance to level for the home side but he headed wide.

As the game entered the final stages, rain became harder making things difficult for both sides. Newtown were still searching for a third and nearly had it when the ball was played in to Breese into the box but he shot wide.

The Bluebirds were also looking for a late equaliser but as time ran out they resorted to long balls which Newtown were able to deal with.

The visitors kept the ball in the corner late on but the Bluebirds were able to get the ball out as they looked for one last chance.

It never came and the visitors held on to secure seventh place in the table.