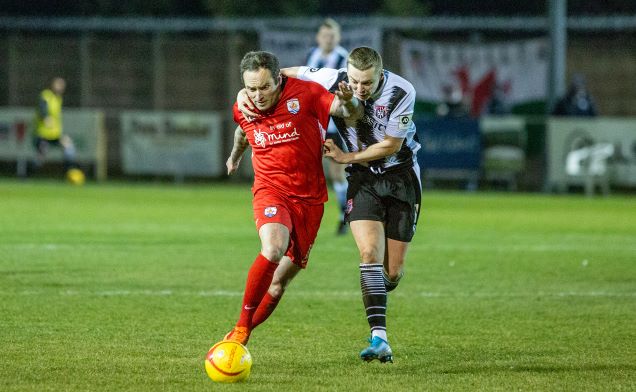 CONNAH’S QUAY NOMADS extended their winning streak to nine games, matching a club record, in a 1-0 win over Flint Town United on Tuesday evening in the JD Cymru Premier.

In a hard-fought derby at the Essity Stadium, an 80th minute Michael Wilde goal and some vital saves by goalkeeper Ollie Byrne were enough to send Nomads to the top of the table.

The game saw Nomads make the short journey to the Essity Stadium for the Flintshire derby, in the second of their six phase one games to be fulfilled following the resumption of league action.

Nomads came into the fixture knowing they could match their club record winning streak, having last won nine games in a row during their 2010/11 Huws Gray Alliance campaign.

Buoyed by a 2-1 comeback win against Newtown at Deeside, Andy Morrison made few changes, but started latest signing Neil Danns who had impressed with a second half debut on the weekend replacing Sameron Dool, and Craig Curran who replaced the suspended Jamie Insall.

There were many familiar faces in the Flint line-up, who were led by ex-Nomads coach Neil Gibson after his appointment as Silkmen boss in late 2020. John Rushton, Ben Nash, Kai Edwards and Rob Hughes were all included in his starting eleven.

The game started in cagey fashion with neither side allowing a chance on their respective goal. The first real chance came after eight minutes and went to the hosts, with Ollie Byrne pushing away a top right corner effort from Callum Bratley.

Neil Danns helped push Nomads upfield, going on a good run in the 12th only to see his shot blocked on the edge of the Flint area.

After 20 minutes, the hosts were asking questions of the Connah’s Quay defence with a free kick from Rob Hughes which was pushed away by Byrne before Danny Holmes made a great clearance to deny a follow up shot at close range.

Flint kept the pressure on, but were frustrated by the Nomads defence who blocked them well with a series of aerial challenges from the likes of George Horan and Danny Harrison.

As the half hour mark approached, tempers were rising with referee John Jones booking three Flint players within 10 minutes.

In the 31st, Neil Danns was again looking for the breakthrough, shooting at close range but seeing his effort blocked before a Wilde header was collected by Flint keeper John Rushton.

As half time approached, it was Nomads who were beginning to see more of the possession as they continued to win set pieces in the host’s half. However, the score remained goalless at the break with Nomads still looking for a way through.

Andy Morrison started the second half with a substitution, handing Johnny Hunt his debut in place of John Disney.

Nomads were quick to begin attacking the Flint end again, with Curran having a shot well saved by Rushton in the 47th. The ball was kept in the Flint half thanks to Nomads’ organised play and a set piece, before Declan Poole sent a shot just over the crossbar on 53 minutes.

Danns was continuing to be instrumental in the midfield, holding the ball up before finding the likes of Wilde and Davies as they sought a clinical finish as the 60 minute mark arrived.

In the 62nd, Wilde looked to convert a long throw in from Danny Holmes, but the chance went just over the crossbar. Seven minutes later, Danns was again in the thick of the action, seeing a seven yard effort blocked as Nomads bombarded the host’s goalmouth.

With 15 minutes remaining, the game was nearly all Nomads, with Flint looking for chances to counter-attack which seldom arrived.

However, on 80 minutes, Nomads finally found the crucial goal when Oliver Byrne sent a free kick up into the Flint area, which Wilde flicked on with a header to see it loop into the net.

Nomads had their 1-0 lead, and set to keep the score in their favour leading to a great battle with Flint in the closing stages. Andy Morrison made a change following the opener, seeing Tom Moore make his club debut coming on for Danny Davies.

As the game went to four additional minutes of injury time, Flint had a certain equaliser denied by Ollie Byrne with an excellent save, which was followed up with a goal line clearance from George Horan.

Man of the match Byrne and captain Horan’s heroic efforts to keep Nomads ahead were rewarded, as their 1-0 victory was confirmed minutes later to see Connah’s Quay leapfrog The New Saints to go top of the league and secure their longest ever winning streak in the top flight.

They will now travel south to face fellow top six side Penybont at the Kymco Stadium on Saturday, March 13, for a 2:30pm kick off.

Flint are also in action on Saturday as they host Caernarfon Town, kick off also at 2:30pm.

£16m invested to speed up access to life saving medicines