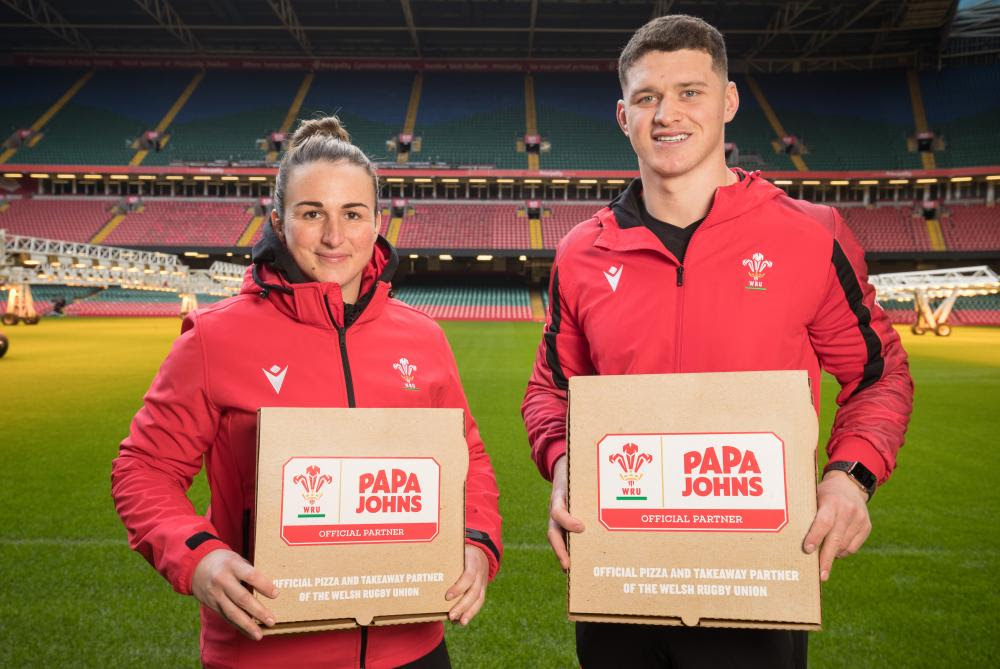 POPULAR pizza delivery chain Papa Johns has announced it will become the official pizza and takeaway partner of the Welsh Rugby Union until 2026.

At a time when partner support remains vital to the grassroots game, this partnership will look to boost community rugby across Wales.

The partnership also offers an opportunity for Papa Johns to engage with rugby fans and broaden its presence in Wales.

Papa Johns will be highly visible at Principality Stadium when Wales host Scotland, France and then Italy in 2022 Guinness Six Nations, starting next month, and will also feature at the Cardiff Arms Park for the Women’s Six Nations beginning in April.

Another element of the partnership sees Papa Johns also become the official food and post-match meal provider for the ‘Road to Principality’ series of community matches which take place annually (pandemic-permitting) at Principality Stadium – when the best clubs, schools and colleges in Wales head to Cardiff to contest a series of finals over ten days, followed by an array of inclusive festivals.

“We are delighted to welcome Papa Johns to the WRU stable as official Pizza and Takeaway partner,”said WRU CEO Steve Phillips.

“The new partnership includes a highly significant investment in Welsh rugby and will see Papa Johns engage directly with our community game over the next five years, which will be equally welcomed by member clubs throughout Wales.

“It is testament to the standing of Welsh rugby in world sport that we are able to attract such significant investment and such high-profile brands, and we are hugely grateful to Papa Johns for the contribution they are making to ensuring a healthy future or our game, especially at this time of stress throughout our industry.”

Papa Johns was first launched in Wales with its first store on City Road in Cardiff in 2014 and now boasts over 20 stores across the country from North to South, including five in holiday parks.

The company has future plans to further expand in North Wales and intends to continue its organic expansion in the South. In 2021 Papa Johns opened a new store in Bridgend, much to the delight of all of its new customers in the area.

Giles Codd, Senior Director of Marketing at Papa Johns said: “We are delighted to get this partnership over the line with the WRU and, with the Guinness Six Nations due to kick off very shortly, there couldn’t be a better time to launch. This agreement will give us a fantastic opportunity to engage with local communities and support the re-emergence of grassroots rugby in Wales via the brilliant ‘Road to Principality’ series.”

“We look forward to growing our relationship with Welsh rugby fans across the world over the next five years and cannot wait to experience our first match day at the Principality Stadium as a partner.”

Wales Women’s captain Siwan Lillicrap said :“This partnership will be a real treat for those players who get to enjoy a Papa Johns post-match meal, what a great deal for Welsh rugby.“

Wales and Cardiff Rugby back row James Botham added: “Whether you’re a spectator or a player at any level, Papa Johns and rugby would certainly seem to go together and we are all very grateful for the support and  the investment in our game.”

Bryncoch up to third after beating 'Gors

Bont prove too strong for Milford