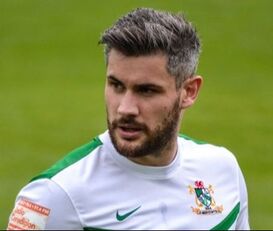 ABERYSTWYTH TOWN have announced the return of striker Jamie Reed to Park Avenue.

The 33-year-old Cymru Premier veteran returns to The Seasiders for a third spell, having first joined in 2007 under Brian Coyne and again in 2015 under Ian Hughes.

One of the Cymru Premier’s most prolific strikers over the past 15 years, Jamie first joined Aber from Wrexham where he had progressed through the youth ranks.

Joining Aber on loan at age 20, Jamie made an immediate and unforgettable impression on his home debut, hitting TNS for three in a 5-1 win at Park Avenue, on his way to finding the net 9 times in 20 appearances.

Jamie was then one of the original three musketeers from the Cymru Premier to ply his trade in Australia, playing for Dandenong Thunder with Aber greats Luke Sherbon and Geoff Kellaway in 2010, later representing South Melbourne. Jamie will now link up once more with Geoff for a fourth time for the remainder of the 2020/21 season.

Returning to the Welsh pyramid in 2014, Jamie joined perennial league winners TNS, from whom he joined Aber for a second loan spell in 2015. History almost repeated itself for Jamie, as a 38 minute brace vs Rhyl gave him the chance to make it two hattricks in two home debuts, only for an impressive save from to-be-Seasider Terry McCormick denying him another treble in front of the Green Army.

Spells with several Cymru Premier teams followed, with Jamie representing Llandudno, Bangor City for a second time, Newtown and Cefn Druids before becoming available for a third stint at Park Avenue, though his first on a permanent basis.

Upon his arrival, Jamie told atfc.org.uk: “My family and I have always felt welcome and we have fond memories from my previous times at Aber, so it was an easy decision to come back.”

Asked about his favourite moments in Black & Green, Jamie added: “The hat-trick on my debut against TNS is the one that sticks out the most, of course. In both spells I’ve done well so hopefully I can score some goals and help the team climb the table.

“It’s so tight in the league at the moment and with the current situation anyone can beat anyone so it’s about taking our opportunities. Hopefully my experience can help the younger lads who, from what I have seen, have a lot of quality.”

Scarlets turn to Ospreys for available players amid Covid-19 troubles

Defeat for Wales u18 in England friendly

Bluebirds held to draw by Met