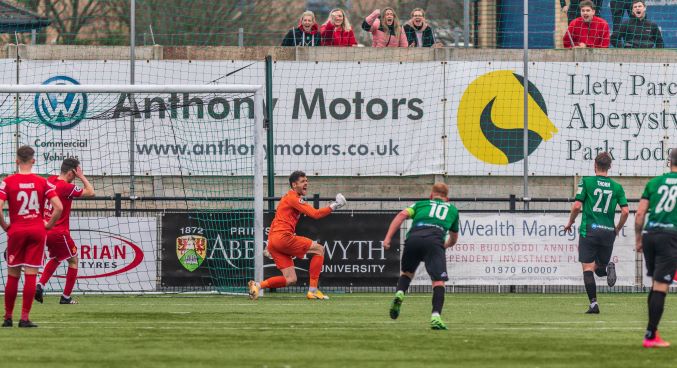 ABERYSTWYTH TOWN’s Connor Roberts saved a late penalty to help his side seal all three points in their game with rivals Newtown on Saturday, March 20.

With the visitors on an impressive run of form since the restart, Town battled hard throughout securing the win thanks to a dinked finish from youngster Harry Franklin, after Newtown were reduced to 10 men on 54 minutes and later denied from the spot on 83 mins.

The game’s first event was a yellow card for the visitors before 60 seconds – a trend throughout the game with the referee keen to keep a tight grip on events.

In line with Town’s games this month, the Seasiders were first to get ahold of the ball and press the opposition half. A pair of chances came in the first ten minutes for Town as a Matty Jones free kick was deflected by the wall before a trademarked Lee Jenkins run saw the ever-impressive youngster deliver a ball just over the head of Jamie Reed from the right flank.

Another chance from a Jones free-kick went amiss before the visitors had their first attempt on goal with a sliced half-volley not troubling the hero-to-be Roberts.

Town weathered some pressure from the visitors before regaining control, with the midfield trio of Thorn, Veale, and Franklin linking excellently with fullbacks Rimmer and Jones to create chances for the attackers.

Newtown created another good chance as the dangerous Ofori latched onto a cross but fired over.

On the stroke of half-time, Matty Jones delivered another free-kick into the area where Harry Franklin was brought to the ground having shot wide to rampant penalty shouts from on-lookers. Referee Bryn Markham-Jones waved away protests and brought an end to a goalless but exciting half.

Newtown came out of the blocks firing for the second half with a huge chance for The Robins fired over from close range. After a sustained 10 minutes of pressure, the game was flipped on its head as Newtown’s Ofori was shown a second yellow card for a late challenge on Jenkins, giving Town a man advantage for the remaining 35 minutes and forcing The Robins into changes.

Aber piled on the pressure thereafter, with Jack Rimmer finding space at right-back to loft balls into pockets of space for Marc Williams and Harry Franklin to pounce upon, the latter crossing to Reed who fired at the keeper.

A long-range effort from Alex Fletcher tested Roberts on 67 minutes before Aber introduced Jon Owen for Owain Jones on 70 minutes.

On 74 minutes, Aber’s best chance of the game fell to Lee Jenkins in the box from closer range but a stupendous save from Dave Jones kept things level, though not for long. On 77 minutes, a Jon Owen flick caused an errand header across the defence by Newtown where Harry Franklin got in front of his man to pick up the ball.

Bearing down on the goal from the right side, the youngster waited for the impressive Dave Jones to come rushing before lofting the ball to the far corner to the delight of those in attendance.

Town couldn’t count their chickens quite yet though, as minutes later Newtown were awarded a penalty for a challenge on the edge of the area. Despite shouts of it deserving a free-kick rather than a spot-kick, Alex Fetcher stepped up to face the veteran Connor Roberts from 15 yards. In a war of wits, Roberts came out on top with a fantastically athletic leap to his left side to deny Fletcher, proving himself as one of the league’s premier shot-stoppers.

Newtown seemed deflated after Roberts’ heroics and created little else, with Jenkins and Bradford once again putting in a very solid performance together.

It was Town who had the chance to make it two on 90+3 minutes when a counter attack led by goalscorer Franklin saw four Town attackers bearing down on goal but his cross was blocked.

On Saturday, March 27, Aber host Penybont while Newtown are at home to Haverfordwest County.