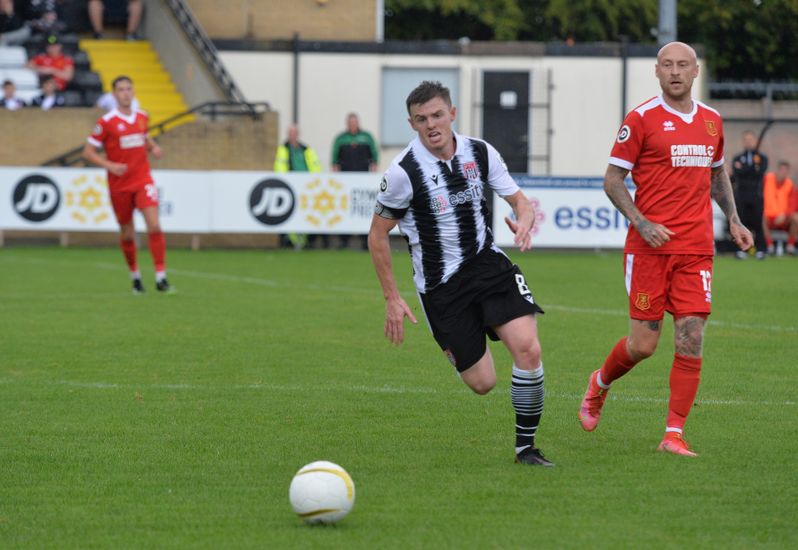 A THREE goal salvo in the opening half hour was to prove too much for Newtown as the Silkmen were at their ruthless best on Saturday (Sept 11).

Flint even had the luxury of missing a penalty on the stroke of half time, the only blip on an otherwise sublime first half showing.

Newtown made a better fist of it in the second half, as the game became more of a feisty affair, but they were unable to mount a successful fightback despite the home side being reduced to ten men on the hour mark, and a fine solo effort from Ben Maher on 78 minutes finally snuffed out any chance of a comeback.

It was an eventful afternoon for Michael Wilde, who before the game was presented with his Cymru Premier League Player of the Season award for the previous campaign, before scoring a goal, missing a penalty and finally being red carded.

From the off, Flint looked as if they meant business, and set about their opponents with vigour. They didn’t have to wait long to make the breakthrough. Alex Jones galloped down the right, and crossed into the box. Newtown keeper Dave Jones, under pressure from Wilde, could only palm the ball down into the path of Callum Bratley who tucked it home.

Wilde was giving the Newtown centre halves a torrid time, whilst Jones was causing chaos down the Newtown left.

The visitors thought they had equalised a couple of minutes later, however, when, from a corner, the ball was headed in, but their joy was short lived when the referee awarded a free kick for a foul on Flint keeper Ryan Woods.

On the quarter of an hour mark, Flint extended their lead, when Jones again got free down the right, made it to the bye-line and then pulled the ball back to Jack Kenny, who slid it past Jones with ease.

It got even better for the home side on 28 minutes, when they went 3-0 in front. A Sam Hart corner was cleared back into his path, and he played it back in to Wilde, whose initial header was blocked, but his second attempt was despatched with deadly accuracy as he rifled the rebound into the roof of the net.

Kenny was pulled back as he went for a cross in first half added on time, and Wilde had a chance to double his tally from the penalty spot, but although he sent Jones the wrong way, his shot rebounded back off the post, and the score remained 3-0 at half time.

Although they had a mountain to climb, Newtown were determined to give it their best shot to try and get back into the match in the second period. The half started quite scrappily, and niggly challenges were flying in from both sides. The Robins were starting to get the upper hand in terms of possession, and eventually, just before the hour mark, they pulled a goal back. Following a corner, which was cleared to the edge of the box, Fumpa Mwandwe collected it, and shot through a crowded area to find the corner of the net.

A rash challenge by Wilde a couple of minutes later, earned him his second yellow card of the afternoon, reducing Flint to ten men. This gave Newtown more impetus, and Flint’s backline were put under even greater pressure, but Ben Nash and Kai Edwards, in particular were outstanding as they repelled the attacks.

Mwandwe saw another effort go close as his dipping shot from range sailed just over the bar.

The game was finally put to bed in Flint’s favour on 78 minutes, when Ben Maher picked the ball up in his own half, and sprinted into the opposition box, before lobbing it over Jones to make it 4-1. It was a stunning individual effort.

The Robins almost replied immediately, but hit the post and with that any faint hopes were finally extinguished as Flint comfortably saw out the remainder of the game.

Barry hold on to secure win for Chesterfield in 500th game