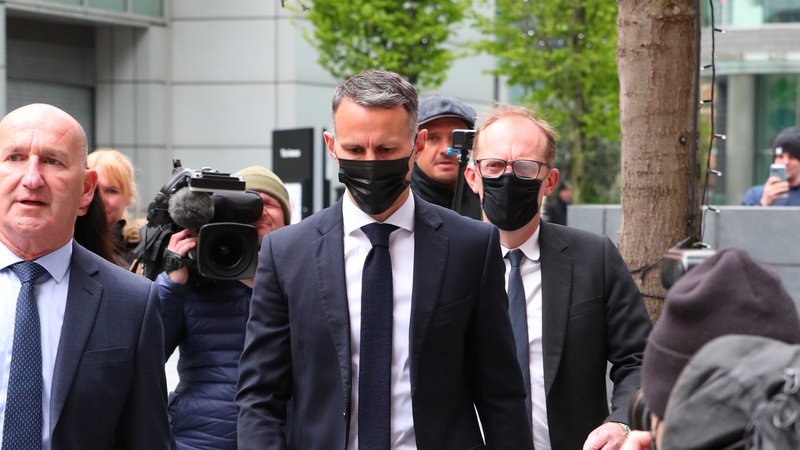 THE FORMER Manchester United footballer Ryan Giggs has pleaded not guilty to three charges of domestic abuse against his ex-partner and her sister.

Giggs, 47, appeared at Manchester magistrates court on Wednesday to face charges of assaulting his ex, Kate Greville, and engaging in controlling or coercive behaviour towards her between 1 December 2017 and 2 November last year.

He was appointed manager of the Wales national team in 2018. When the criminal charges against him were announced last week, the Football Association of Wales (FAW) said Robert Page would manage the team for this summer’s postponed Euro 2020 tournament.

The assault is alleged to have happened at his home in Worsley, Salford, on 2 November.

Giggs is also accused of beating Emma Greville on the same date. She is believed to be Kate’s sister.

Giggs appeared in the dock for his first court appearance as the three charges against him were read out and he entered his not guilty pleas.

He was bailed to appear at Manchester crown court on 26 May.

His bail conditions prevent him from contacting Kate or Emma Greville or going to any address where they are.

Giggs is accused of having “repeatedly or continuously engaged in behaviour which was controlling or coercive, namely, used violence, isolation, belittling, humiliation, harassment, degradation and abuse towards Kate Greville, to whom, at the time of the behaviour, you were personally connected in that you were in an intimate relationship, that behaviour having a serious effect on her, and you knew or ought to have known that the behaviour would have a serious effect on her”.

Giggs spent his entire playing career at Manchester United, making his debut in 1991 and retiring in 2016.

The charge of controlling or coercive behaviour in an intimate or family relationship was introduced in the Serious Crime Act 2015.