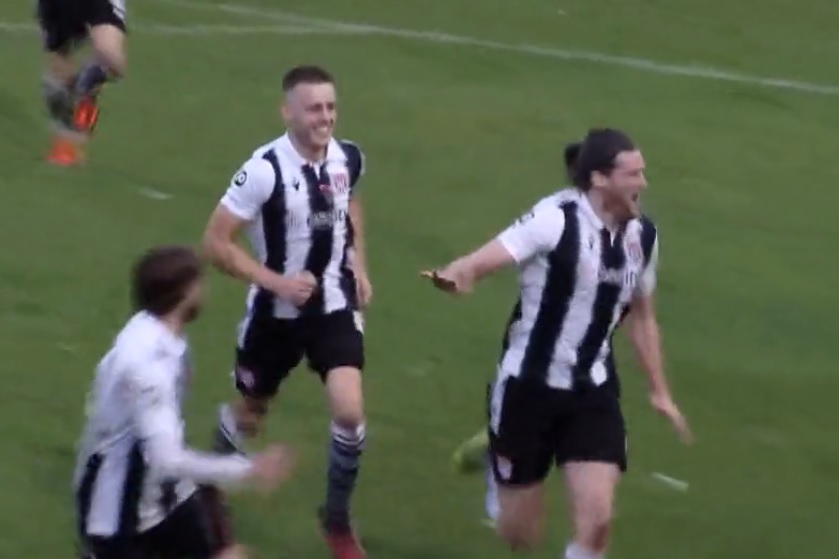 Facing a strong wind blowing into their faces in the first half, the Silkmen mastered the elements, and actually produced the better football, to deservedly lead at the break.

Then a second, not long into the second half looked to have them firmly in control, and a third looked to have put the seal on things, until it got ruled out for offside, and Penybont pulled one back to ensure a nervy last 10 minutes or so. But up popped Jack Kenny in added on time to score his second of the afternoon, and confirm the victory.

Having got to grips with the tricky conditions, Flint began to assert themselves on the game midway through the first half.

Michael Wilde served notice by going close on a couple of occasions, before he finally broke the deadlock.

First, he connected with a fine inswinging ball from Jake Phillips, but was unable to keep his attempt on target, and it went over the bar, then he was just a whisker away from meeting a Jack Kenny delivery from the other side, on the left.

But at the third time of asking, he made no mistake on 36 minutes. Phillips took a throw in on the right, received the ball back, and darted to the bye line, before delivering an exquisite ball right into the heart of the danger area, where Wilde was waiting to gobble it up, as he rose to head past Ashley Morris in the Penybont goal.

The visitors reply was almost instantaneous, as the impressive Kane Owen let fly from fully 35 yards, forcing Jon Rushton into making a fine stop as he pushed the shot over the bar.

Having come through a difficult opening spell, when the wind was forcing the ball back into their box, the home side had played some good football, and deservedly went into the break in the lead.

They also started the second half strongly, and Conor Harwood was played in by Kenny, but his shot took a deflection from a defender, which took the sting out of it, and Morris was able to gather it comfortably.

Then, from a Morris goal kick, against the wind, Flint won the ball back, and Wilde headed on into Kenny’s path, who shrugged off the attentions of a defender to shoot across Morris into the net.

Rushton was called upon again on 64 minutes, this time pushing a strong Nathan Wood shot around the post.

Flint briefly thought they had sewn the game up when Wilde had the ball in the net shortly afterwards. A Mark Cadwallader shot deflected into Wilde’s path, and the Flint striker quickly lashed it past Morris, but in an incredibly close call he was just adjudged to be offside, as the linesman’s flag went up as he started to celebrate.

Bont took full advantage of their let off by hitting back with a goal of their own on 75 minutes. Substitute Lewis Clutton received the ball from a throw in and was allowed to progress into the area before hitting a shot that deflected off Kai Edwards and deceived Rushton to get his side back into the match.

For the next ten minutes or so, Flint were penned back in their own half, and struggled to find an outlet, as the visitors pressed hard for an equaliser. Rushton pulled off a fine double save, and the defenders in front of him were doing their best to block shots and make tackles, as Bont produced some sustained attacking play.

Eventually, Flint weathered the storm, and as Bont became more and more desperate, Kenny seized upon an under hit back pass as the game was well into stoppage time. Morris did well to block his effort, but the ball fell into the path of the supporting Cadwallader, but Morris again proved to be the barrier.

Then Kenny came back for a second bite of the cherry, and this time he found a way past Morris as he lobbed the ball into the back of the net and past two defenders on the line from about 18 yards out.

Fantastic five for Newtown against Druids

The very best WPL European Matches of all time