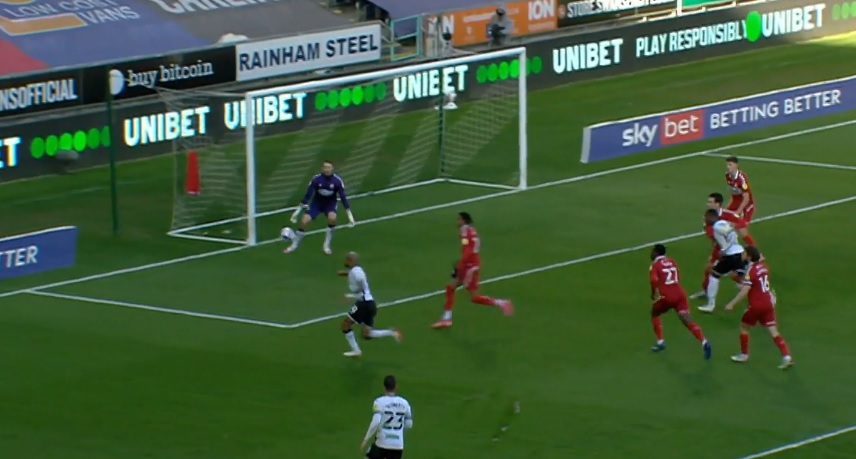 Andre Ayew scores the first of his two goals on Saturday

SWANSEA CITY moved up to third in the Championship table on Saturday, March 6, as they beat Middlesbrough 2-1 at the Liberty Stadium.

The result left former Cardiff City manager Neil Warnock fuming after the award of a late penalty which gave the Swans victory.

Referee Gavin Ward had initially given a corner but changed his mind to award the spot kick and it was Andre Ayew who scored once again.

The home side went into the game on the back of a 2-1 win at Stoke in which Ayew had scored an injury time penalty to give the Swans the three points.

In the opening minutes Ayew tried his luck with an acrobatic effort but he didn’t catch it cleanly and his effort was easily saved.

On 25 minutes there was a scare for the Swans as Marc Bola robbed the ball off Kyle Naughton before cutting the ball back for Duncan Watmore but Swans keeper Freddie Woodman made a good save to keep it out.

With five minutes to go until half time it was the home side who made the breakthrough.

Two boro defenders got in each other’s way while attempting to clear and the ball fell to Ayew whose deflected shot went in at the near post.

That was Ayew’s 12th goal of the season and his third game in a row in which he has found the net.

Boro thought they had equalised early in the second half as Bola fired into the net but the referee had already blown for a free kick after Yannick Bolasie was adjudged to have fouled Jay Fulton in the build-up.

The visitors continued to enjoy a good spell of pressure but they were unable to get on the scoresheet.

Both sides made substitutions in order to try and change the game and it was one of those who almost got in as the Swans looked to double their lead. A long throw found its way to sub Jamal Lowe but he took too long to get his shot away and the danger was cleared.

With the clock ticking over 90 minutes, six more were added by the officials and in the first of those, Boro were rewarded for their second half display.

Sam Morsy’s deflected strike wrong-footed Woodman and went in to the net to make it 1-1.

Just as it looked like the game would finish all square, deep into injury time, George Saville went in for a challenge on Jake Bidwell and the referee awarded a corner.

However, referee Ward seemingly changed his mind, deciding that Saville had fouled Bidwell and then pointed to the spot.

Ayew was given the task of taking the penalty and he held his nerve to score his thirteenth goal of the season and more importantly, give his side another valuable three points.

The Swans are in action tonight as they take on Blackburn at Ewood Park in a game that kicks off at 6pm.

This is one of the Swan’s games in hand over their promotion chasing rivals and a win could see them move back into second place in the table.