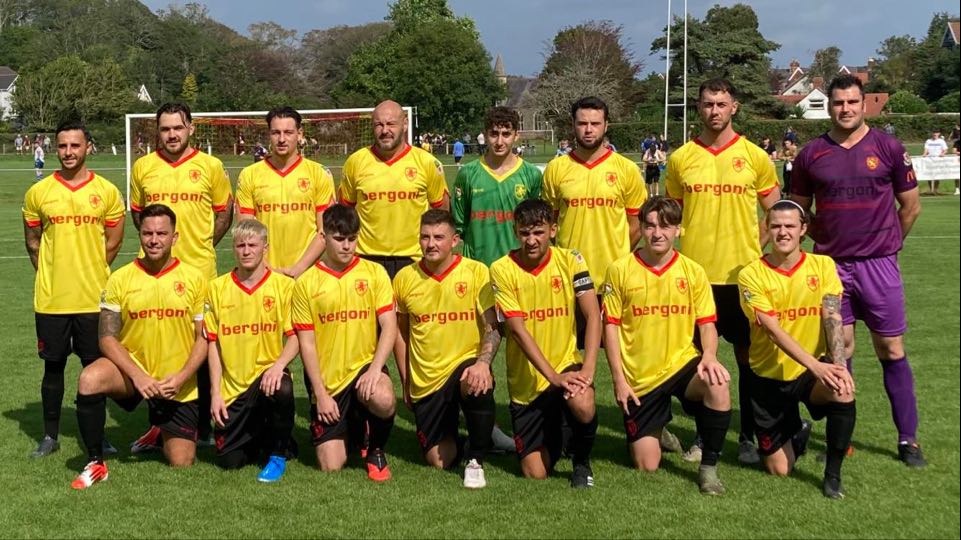 MUMBLES Rangers surrendered a two-goal lead against Penlan on Saturday (Sept 4) in their first game in the West Wales Premier League.

The Sun shone brightly over a very warm Underhill Park and a good crowd in excess of 200 watched this keenly contested game.

Mumbles Rangers unveiled their new home shirts prior to kick off and they started well with Mathew Thomas and Elliot Smith causing problems for the visitors defence.

Penlan also looked dangerous in attack with Luke Dalling, Nathan Lewis and Dale Otten testing the home defence with their aerial threat and came close on a few occasions to opening the scoring in the opening exchanges.

With 15 minutes played a challenge from Rangers forward Joshua Doyle was adjudged to be reckless and the referee brandished a straight red card without hesitation leaving Rangers down to ten men with 75 minutes to play in this game.

The sending off seemed to act as a spur to the Rangers team who continued to move the ball around the park with some nice inter passing moves.

Penlan with the man advantage tried to press home their advantage and a mix of good fortune, woodwork, good goalkeeping and a stubborn defensive play kept Penlan out.

With 40 minutes played Mathew Thomas latched onto the ball wide left and beat his marker and ran towards the Penlan goal. Thomas looked up and unleashed a low cross shot that beat the visitors keeper to give his side the lead 1-0.

Rangers held onto their lead as the referee brought the first half to an end.

The second half started and it was Rangers who enjoyed the early balance of play which saw Jordan Lloyd-Evans almost doubling Rangers lead when he burst through with some fine individual play but volleyed the ball over the Penlan cross bar.

It was a purple patch for Rangers Jordan as he had another good chance but just couldn’t find the finish needed.

However after 65 minutes, Rangers were not to be denied and were awarded a penalty. Elliot Smith took the responsibility but had to wait a while whilst the referee booked the visitors goalkeeper.

Elliot’s spot kick nestled into the back of the Penlan net to extend Rangers lead 2-0.

Penlan responded and six minutes later their left back Liam Otten broke through the Rangers defence and struck the ball low and hard. The ball struck the inside of the far post and rebounded across the line.

Penlan were buoyant and a minute later Luke Dalling got round the back of the Rangers defence and his low cross was put away by striker Nathan Lewis.

Rangers were rocked and the home supporters looked at their watches to see that there were still 18 minutes plus added on time to play.

Rangers dug deep into their reserves supported by Rangers young goalkeeper Callum Andrews who was making some fine stops.

Penlan tried to push on to claim all the points but Rangers had other ideas. As the clock ran down Rangers fought every inch to preserve a point.

The referee blew the final whistle and the game ended in a highly entertaining draw.

Probably both sides might view the game as points dropped but overall a draw was probably a fair result as both sides could point to guilt edged chances to win the game.

A great advert for West Wales Premier league with both teams providing great entertainment for the supporters.