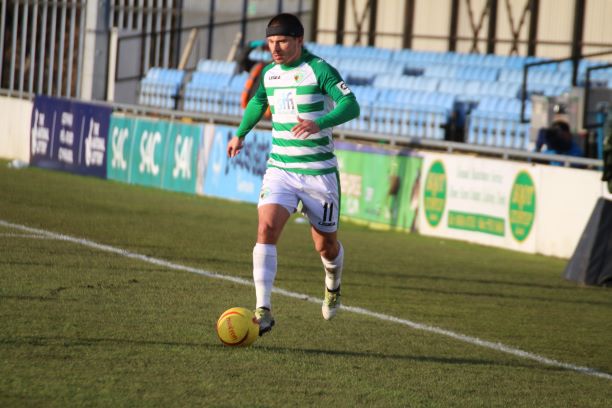 THE NEW SAINTS closed the gap to leaders Connah’s Quay Nomads on Saturday afternoon (Mar 27) as they thumped Flint 6-0.

They now sit three points behind the Nomads following their impressive win in which five different names were on the score sheet at the Essity Stadium, including Ryan Brobbel, who scored on his first appearance since a knee injury last September.

Chris Seargeant couldn’t have asked for a better start from his side, who got their noses in front with just seven minutes played. John Rushton made a good initial save to deny Adrian Cieslewicz, but could only parry the ball into the path of the oncoming Ben Clark.

The number 19 was left with an easy finish into an empty goal, and he slid in to give his side an early 1-0 lead.

It didn’t take long for The Saints to double their advantage, as just two minutes later, they were celebrating again.

Cieslewicz was again the provider, this time from a corner, as he picked out Ryan Astles in the middle of the box, where the central defender was waiting to power a header past the helpless Flint goalkeeper to make things 2-0.

The scoreline got even better for Seargeant’s side with 11 minutes gone, when Louis Robles got in on the act to add a third.

After being spotted on the far side of the box by Cieslewicz, the Polish winger picked out his right-sided counterpart with a well-placed pass, which gave the number 18 an easy finish from close range.

The Saints weren’t finished there though and in the 16th minute, Robles scored his second of the match and his side’s fourth.

A corner from Chris Marriott reached the former Bala Town man in space in the middle, and his well-placed cushioned header evaded everyone in the box to nestle in the far corner of the net.

Chances continued to fall The Saints’ way throughout the half, and both Greg Draper and Danny Redmond came close to extended their side’s lead further as they brought good saves from Rushton.

However, two minutes before the half-time break The Saints did extend their advantage further and provider turned scorer, as Cieslewicz got in amongst the goals.

After being played in by Draper, the number 11 sent a cool finish past Rushton to make the score 5-0 to TNS, and score his 50th goal in a Saints shirt in the process.

After his superb first-half display, Cieslewicz made way at the interval, with Ryan Brobbel taking his place for the second period.

It was Brobbel’s first appearance since a knee injury last September and the Northern Ireland Under-21 international wasted no time in making his mark on the match, as just six minutes after being introduced, he scored his side’s sixth, beating Rushton with a smart near post finish.

Brobbel had further chances to extend his side’s margin of victory, forcing a save from Rushton with a speculative effort, before sending a late free-kick wide, but the Flint defence held out resolutely in the second 45 minutes, restricting The Saints to just six on the day.

Seagreant’s men are back in action on Friday, taking on Caernarfon Town at Park Hall in the final match before the Championship Conference starts.