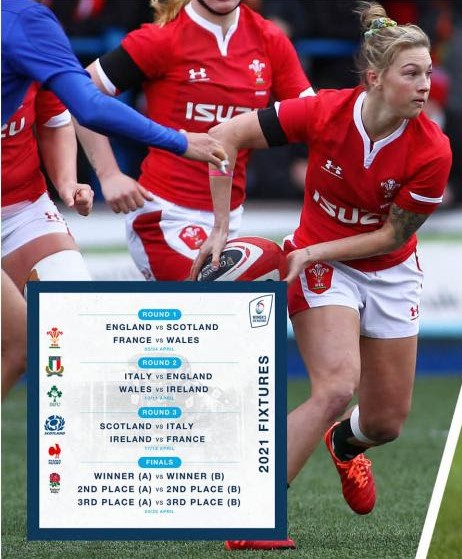 The squad will travel to Vannes to face France next weekend (Sat 3 April, 8pm BST) before hosting Ireland at Cardiff Arms Park on Saturday 10 April (5pm).

The France Test will be the first international match for Wales Women since they played England in March last year and the excitement within the squad is palpable.

Abrahams said: “We are all so excited to get on the pitch and represent the jersey. It’s all about France and putting into practice what we’ve done in training. We want to show what we can do and the matches will be a great gauge for where we are as a team.”

There are three uncapped players in the 32-strong squad – Wasps fly-half Flo Williams, Saracens prop Donna Rose and Sale Sharks scrum half Jess Roberts; while there are also a number of returning Wales internationals in what is described as one of the most competitive squads in recent years largely due to their recent performances for their Allianz Premier 15s clubs.

Army duo Gemma Rowland and Bethan Dainton are back in camp along with Saracens scrum half Jade Knight. Sale Sharks second row Teleri Wyn Davies, who gained one cap against Scotland in 2018 has been called up, along with Exeter full-back Niamh Terry and prop Gwenllian Jenkins who gained two caps in November 2019

Caryl Thomas and Shona Powell-Hughes are also set to return in a Wales shirt – they were first recalled in the squad for the cancelled Scotland game in the autumn.

Keira Bevan returns after long-term injury while, along with the 32 selected in the Six Nations squad, three players have been invited to continue to train with the squad in a development capacity – Madi Johns, Beth Huntley and Sisilia Tuipulotu.

Abrahams continued: “Selection came with some welcome headaches, I think this is a very competitive squad and a nice blend between the more experienced players and players new to the squad or returning. All the selected players have really put their hands up, both in their club performances within the Allianz Premier 15s and in training with us. They all deserve their place and are looking forward to showing what they can do in the Six Nations.”

Captain Siwan Lillicrap added: “Playing the Six Nations as a standalone tournament later in the year gives us a real platform to show what we can do and inspire the next generation of girls to play rugby. We can’t wait to get on the pitch again, we are raring to go.”

Warren Abrahams will be assisted during this campaign by forwards coach Geraint Lewis, World Rugby intern Sophie Spence and skills coach Darren Edwards who steps in on an interim basis following the resignation of Rachel Taylor.