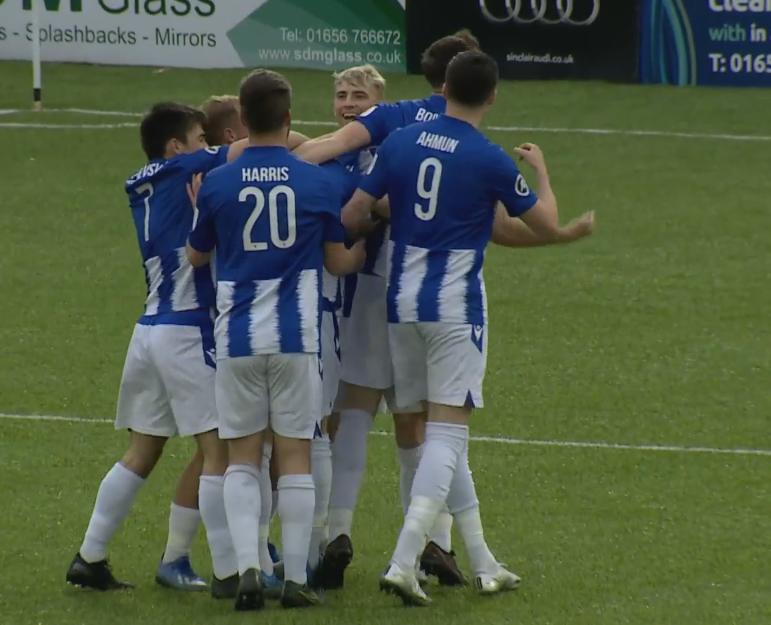 PENYBONT moved five points clear of Barry Town United on Tuesday (Apr 27), as they beat them 2-0 at the SDM Glass Stadium.

The win temporarily moved the Bont closer to Bala Town but after the Lakesiders beat Connah’s Quay Nomads, they now sit nine points behind third place.

The game was tight throughout, but Penybont took their chances to ensure victory.

In the sixth minute, Nathan Wood struck a great shot which forced the Barry goalkeeper, Michael Lewis, to make a good save.

Straight after this, the home side scored a wonderfully worked goal from a corner which was finished off by Wood, who completed the move with a composed finish into the back of the net.

Lewis Harling had a chance to score after great work down the line from Mael Davies who put the ball into the box and found Harling, but he didn’t trouble the keeper.

Barry’s first opportunity to score in the game came from a Luke Cooper header after a looping corner met his head and just went over the bar.

After coming off the bench to replace the injured Matty Harris, Sam Snaith almost made an instant impact as Barry defender, Curtis McDonald, made a mistake which left Snaith one on one with the keeper but his effort was saved.

The match picked up where it left off, a very tight affair with both teams looking likely to score.

Early into the second half, Ben Ahmun hit a half volley on the edge of the box, but it just went over the bar.

The away side almost equalised after a free-kick from former Wales international, David Cotterill, was matched by a huge save from Bont goalkeeper Ashley Morris who pushed it away from goal.

Barry continued to threaten the Penybont goal as a wonderful ball from Cotterill found Rhys Kavanagh who headed over the bar.

Shortly after this, Penybont went down the other end and had an opportunity to double their lead with a Snaith shot but he didn’t test the keeper.

Penybont managed to double their lead after a great counter-attacking goal which was started and finished by Penybont captain, Kane Owen, who finished the move with a great finish into the roof of the net.

The chances continued for Rhys Griffiths’ side, this time Lewis Clutton had a shot from a tight angle but sadly for Bont it just went wide of the far post.

Towards the end of the game, Barry nearly scored a consolation goal with Cotterill running in on goal but thankfully for the home side Morris was alert and able to get to the ball.

Gorseinon, Felinfoel and Emlyn all win on opening day