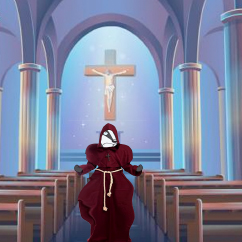 THE REFORMATION changed the course of western European history.
It didn’t begin in 1517 when Martin Luther nailed his 95 Theses to a church door in Wittenberg.

It’d been simmering underneath the surface and stamped down brutally whenever it erupted for at least two centuries before Luther’s singular act of defiance (which probably never happened).

In Protestants’ eyes, the established Church had erected an apparatus around itself that had nothing to do with the Bible and everything to do with materialism and the exploitation of the people.

The Church, in their view, was a collection of buildings, rituals, and hierarchy.
God had become irrelevant within the shell of secular power and human greed; his voice was drowned out by the sound of money changing hands in the temple.

The machinery and its maintenance mattered more than the divine.

Badger’s cursory introduction to the topic has a relevant and present-day point.

The United Kingdom is – at least as far as Christianity goes – a secular society.
The overwhelming majority of us interact with God on only three occasions: the celebrations of birth, marriage, and death.

We’ve replaced the presence of religion in our lives with secular symbols and institutions.
The way some people fetishise the past – and it’s by no means uniquely British (try France or America, readers. You couldn’t make it up, but the French and Americans have) – has, for many, replaced religion.

Putting it very crudely, the glory of the British Empire and winning two world wars and one world cup has replaced the Stations of the Cross and veneration of saints as touchstones of faith and identity.

That’s too easy a target for Badger to dwell on, however.
If there’s a secular equivalent of the Church in the United Kingdom today, it’s the National Health Service.

Last week, Badger wrote that questioning whether the NHS was sustainable and affordable was something near heresy.

In Wales, which mythologises its contribution to the NHS’s foundation, questioning the NHS is the equivalent of a peasant rocking up at St Peter’s in Rome and taking a dump in front of a medieval pope.

It’s an unthinkable proposition.
The current Conservative leadership contenders have acknowledged the NHS’s dire condition but have little to say about fixing the problem.

And Badger has an idea why that is the

case.
The NHS is unfixable.

“Efficiency measures” mean cuts, and trying to make the NHS more efficient is like Canute sitting on the beach trying to turn back the tide.

The NHS is not only imperfect but outdated.
The world has changed since 1947.

Then, healthcare was a luxury that not everyone could afford
The NHS was founded on the principle that the health service should be available to all, free at the point of delivery and financed from taxation, which means (in theory) people contribute according to their means.

That is still a central pillar of most parts of the NHS today.

Despite some significant anxieties about future funding and dissatisfaction with some aspects of the service, it is at the top of the list of things the public is most proud of, with strong support expressed for the underlying values on which it is based.
However, a seventy-year-old body to which bits have been tacked on like additions to a cathedral is structurally unsound.

The NHS, like the mediaeval Catholic Church, needs renewal and reformation.
Although the UK’s taxpayers say they would pay more tax to support the NHS, when it comes to the ballot box, they clutch their wallets and purses in one hand and the polling booth’s pen in the other when making their votes.

Badger has said several times you can have all the public services you want as long as you are prepared to fund them.

And the numbers involved in funding the NHS are eye-watering.
In a budget of £170bn a year, saving a couple of million here and there means zippidy-doo-dah.

Rishi Sunak, onetime Chancellor of the Exchequer and – shortly – US resident foreign national, has the bonkers idea that one way to save the NHS money is to fine patients who don’t turn up for appointments.

That won’t make a dent in the problem; if you don’t know that, you’re stark, staring mad.
The stick’s effect will deter those who need treatment from getting it for fear of being unable to afford the bus fare, petrol, and the time off work to seek it.

By the time those concerned seek treatment, it might be too late and cost exponentially more to treat them than the administrative costs of sending out letters demanding a tenner a pop.
Fiddling at the edges, which is all governments have done since the 1950s, isn’t going to cut it.

Suppose the UK wants a health service funded by taxation.
In that case, politicians must do considerably more than fanny around with tax cuts (cutting tax receipts is not the way to fund public services, Liz) and gimmicks (good God, Rishi).
The big lie about National Insurance is that it is like an investment everyone pays to access certain services.

Nonsense!
National Insurance, like taxation, is allocated and spent on receipt.
You never pay in; you only pay out.

There’s no investment strategy, sinking fund, or reinsuring of the risk.
The money paid out today for NHS services is not the result of the wise investment of past taxes and National Insurance Contributions.

The money comes from the Government’s current income, supplemented by massive borrowing at the centre and local levels.

And if anyone thinks that’s sustainable, Badger would like to show you a bridge he has for sale.

As the working population shrinks, tax receipts fall.
As people live longer and continue living in ill health, the demand for money for the NHS grows.
Badger has a proposal, therefore, and it will be very unpopular.

In Germany, workers pay a designated proportion of their gross income directly into a healthcare fund. The sum involved is around 15% of gross earnings, with a safety net for those earning below a certain amount. Treatments are free for the unemployed and those dependent on the state pension as their only income. All German workers must be enrolled.
The cost of public insurance depends on one’s earnings and is a properly progressive approach to funding healthcare.

No mucking around with playground economics or waiting for Godot or God to turn up and sort out the mess.
It also keeps the Government’s sticky mitts out of the spending pot if it’s in surplus.
There are other ways to reform healthcare, but before even thinking about system change, you’ve got to know how to fund it.

And if you believe Liz Truss, Rishi Sunak, Mark Drakeford, Keir Starmer, Adam Price, or Uncle Tom Cobley can come up with a credible funding alternative, or if you imagine tax cuts, handouts, and efficiencies can deliver a working healthcare system?
Well, Badger still has that bridge for sale.