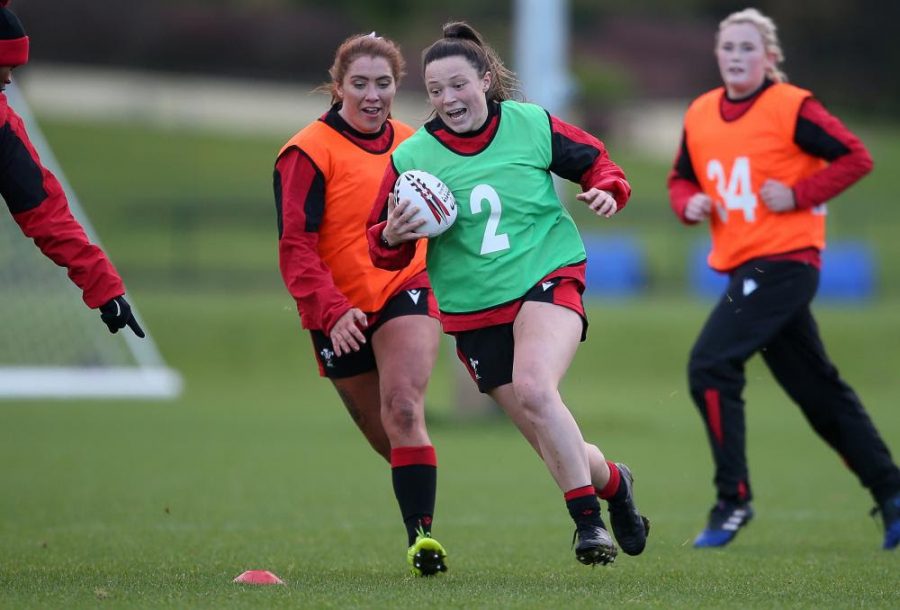 Cohesion was the focus for new Wales Women head coach Warren Abrahams during his first training camp of 2021.
Having been in post just over a month, Abrahams has spent time watching the Welsh performances in the Allianz Premier 15s and getting to know players and staff but the two-day camp was a welcome opportunity for quality face to face time with an enlarged training squad.

“We achieved our key aims on the weekend. The main thing was to learn more about the players. The more we understand them as individuals and as a team, that’s where we can make them better as players.
“The ultimate goal at the moment is to develop cohesion. We have to have the right people and make sure we work incredibly hard on those relationships between players and with management. Everything is tailored to making the team better and we also had some meaningful conversations around the legacy this team wants to leave for the next generation of Welsh women’s rugby and this team has to be the role model for that. That is a long-term goal.”
Abrahams is buoyed by what he’s seen so far. The vast majority of this training squad play in the Allianz Premiership and our players aren’t just making up the numbers. They’re putting down some big markers – just look at Kayleigh Powell and Hannah Jones who both earned a Player of the Match recently and Jaz Joyce who was Player of the Month for December. We’re really proud of how well our players are doing, it’s great for the programme and those experiences are just going to make them better.”
Siwan Lillicrap added, “It’s been nice to get together so soon in the New Year – the first step in a huge year ahead. The focus this weekend was on building a foundation and exploring what we’ve got as a squad.
“I think we absolutely achieved that, the relationships are developing along with a confidence in the squad . It’s been a tough, challenging camp but that’s what you want as we build towards the Six Nations and Rugby World Cup.”
Lillicrap welcomed the input of the new-look coaching team, former Wales captain and Colwyn Bay head coach Rachel Taylor coming in as national skills coach and former Ireland international and Penclawdd forwards coach Sophie Spence joining the set-up as Wales’ World Rugby coaching intern.
“Warren has been very inspirational for us already. It feels like he’s been in post much longer as we’ve done a lot of work on zoom already. It’s great to have Rachel on board. She’s a role model for many of us with what’s she’s done on the field as Wales captain and off it as a coach and Sophie too with her international experience and coaching knowledge.”
Training squad:
Forwards: Abbie Fleming, Alisha Butchers, Gwen Crabb, Georgia Evans, Cerys Hale, Cara Hope, Molly Kelly, Natalia John, Manon Johnes, Kelsey Jones, Beth Lewis, Siwan Lillicrap, Robyn Lock, Shona Powell-Hughes, Donna Rose, Caryl Thomas, Meg Webb, Teleri Wyn Davies
Backs: Alecs Donovan, Beth Huntley, Bryonie King, Courtney Keight, Jade Knight, Caitlin Lewis, Lisa Neumann, Hannah Jones, Jasmine Joyce, Kayleigh Powell, Paige Randall, Jess Roberts, Gemma Rowland, Lauren Smyth, Elinor Snowsill, Robyn Wilkins, Flo Williams