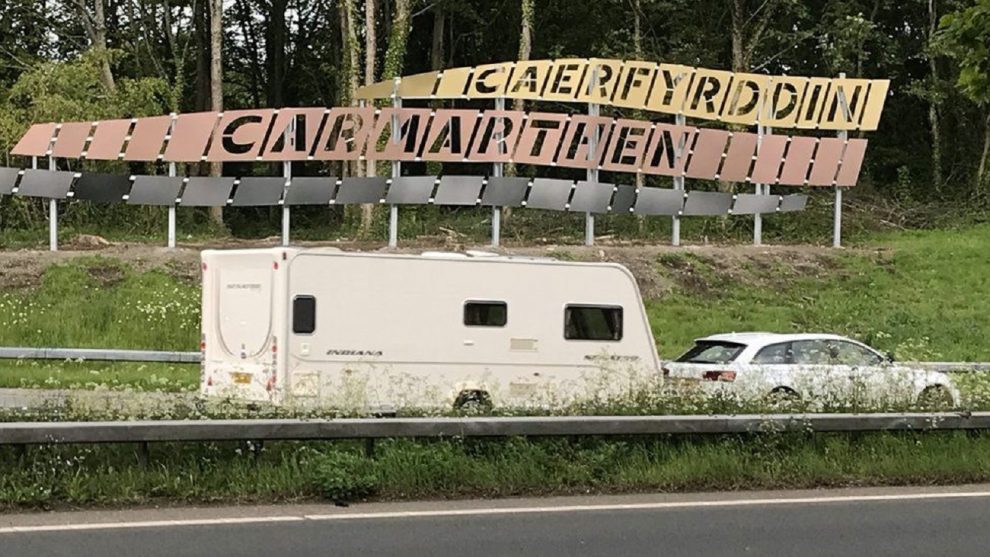 THE SO-CALLED ‘Hollywood sign’ erected on the A40 just west of Carmarthen has proved to be very controversial.

Now Carmarthen Town Councillors Alun Lenny and Gareth Jones have stepped into the fray, taking aim at critics while expressing strong reservations about the sign’s location.

In a joint statement, Cllrs Jones and Lenny said: “At a time when everyone if working so hard to promote Carmarthen post-Covid, it’s a shame that this row over a sign is dominating the agenda.

“As local councillors, we wish to set the record straight.

“The sign was commissioned several years ago, in a scheme prepared by consultants on behalf of the Town Forum, which represents a number of local bodies and traders in Carmarthen as well as the town and county councils.

“The sign did NOT cost £344,000– it’s a very small part of the Morfa scheme, the huge wetland amenity and conservation area between Johnstown and Carmarthen town, which has proved to be so popular with walkers.

“Neither did the money come out of the pockets of Carmarthenshire council taxpayers.

“The purpose of the sign is to alert tourists and other passing motorists that there is a town here, due to the by-pass systems being too efficient in guiding traffic past Carmarthen.

“However, the sign has not turned out as anticipated, going by the artist’s impression provided by the consultants. It does not meet our expectations.

“You can’t really read it, as it’s practically parallel to the A40.

“Trying to do so may distract motorist from watching the road at a point where a very short slip lane enters the dual carriageway.

“In our view, the sign is ineffective and possibly hazardous – although it was approved by the Welsh Government’s Trunk Road Agency.

“For these reasons, we’ve asked the Chief Executive and the Leader of Carmarthenshire County Council to hold an inquiry into the way in which this scheme was delivered, and if it would be feasible to relocate the sign.”