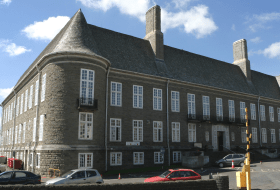 PROPOSALS that could result in new parking charges and the demise of a leisure centre are among the tough decisions facing Carmarthenshire Council chiefs in the coming weeks.

As things currently stand the Plaid Cymru Independent-led authority needs to find savings of £9.3 million to balance the books in 2023-24.

These are split between £6.1 million of what were described in a cabinet report as managerial savings resulting in “no perceivable change” to the overall delivery of service and £3.2 million of new savings.

All Welsh councils face financial challenges due to major wage and energy inflation with Swansea’s savings requirement for example more than double that of Carmarthenshire’s.

The new savings proposals
The £3.2 million of new proposals include the withdrawal of the park and ride shuttle bus from Nant-y-Ci, west of Carmarthen, to Carmarthen town centre and Glangwili Hospital saving £40,000. The cabinet report said the service had just over four passengers per trip on average.

Another proposal to is remove up to a fifth of the council’s 2,500-plus litter bins saving £100,000. Bins in lay-bys, said the report, were often filled with household waste but shouldn’t be.

Another £100,000 saving would be a reduction in the authority’s youth support service, which carries out a range of work, mainly by reducing the number of full-time school-based youth workers.

Meanwhile reducing Carmarthenshire music service staffing costs and not filling vacant positions would trim £75,000 from the budget.
Also on the table is a £63,000 saving by closing Nantycaws and Wernddu household recycling centres one day a week and reducing the opening times of Whitland’s to 10am-4pm all year round.

Longer-term proposals include closing Pendine Outdoor Education Centre, saving £40,000 in 2023-24 and more in the following two years, while looking to provide an alternative facility.

St Clears Leisure Centre, meanwhile, could be closed or transferred to a new operator saving £35,000 next year. The report said a full service would continue at Carmarthen Leisure Centre around 10 miles away.

The proposals would also result in charging at nine car parks including in Burry Port, Kidwelly, Llanybydder, and Llanelli, which are currently free, saving £10,000 in 2023-24 and considerably more the following year.

The bulk of the new savings, though, are a £2.7 million cut in the delegated schools budget although funding will be provided to meet the substantial increase in energy costs and teacher pay awards. School governing bodies would have to manage this reduction.

The managerial savings proposals
There are dozens of measures to save £6.1 million and these include a £600,000 cut in the number of “care” hours provided by domiciliary carers to mainly elderly residents. This would be partly achieved by reducing, where appropriate, the number of “double”-staffed visits by carers – instances when two carers visit a person at the same time.

A reduction in residential care for people with learning disabilities or mental health issues to a “supported living” model in the community would help save £475,000 while a £125,000 gain would be achieved by cutting social care transport based on demand.

Another proposal is to acquire a second camera enforcement vehicle to generate £40,000 income.

Employing an ecology officer and landscape officer would, according to the cabinet report, save £100,000 by bringing the roles in-house rather than procuring external specialists.

Meanwhile £200,000 would be saved by providing cheaper food bin liners to residents than currently and £75,000 saved by reducing street cleaning.

What happens now
The ruling Plaid-Independent cabinet has approved the draft budget proposals and a public consultation is under way.

Overall the council expects to spend £450.1 million on its day-to-day costs in 2023-24 with £338 million coming from the Welsh Government and £112.1 million via council tax. This represents a 7% council tax rise.

Cllr Alun Lenny, cabinet member for resources, said efforts would be made in the coming weeks to limit the council tax increase and there is a sum of £716,000 which could be used to address consultation responses. But this sum might also be needed to tackle further spending pressures.

The Plaid group will get together to discuss the savings the proposals on January 13 and seminars for all councillors will take place next week.

There will also be consultations with school leaders and trade unions shortly. Revisions to the budget are likely before it is set at a meeting of full council on March 1.

The Welsh Government’s final funding settlement is due to be received by the council on March 7 so there may be scope for an 11th-hour change to council tax.

What Plaid and the Labour opposition are saying
Plaid’s Cllr Lenny said: “We all accept that making savings is not pleasant or desirable. The word ‘unprecedented’ has been used a lot this year and it’s a fair description of the position we and other councils fund ourselves in.”

He said the utmost effort had been made to strike a balance between savings and “an inevitable “rise in council tax.

He added: “Although cabinet has published the proposals we would urge the public to respond to them as we are anxious to make this as fair a consultation as possible.”

Labour group leader Cllr Rob James said: “We welcome the £23 million extra in annual funding provided by Welsh Government, which has safeguarded many local jobs and eased pressure on our council services.

“The areas where Carmarthenshire Labour councillors have most concerns is around cuts in social services and day care centres with the pressure on our NHS currently, delaying the enrolment age of children, proposals to remove a large number of bins that will make our streets dirtier, and changes to additional learning needs school transport.

“Over the last few months we have been in discussion with Plaid Cymru and we are pleased that our policies on tackling long-term empty properties, reducing reliance on expensive agency workers, and back office/managerial efficiencies have made it into the budget.

“We will now continue working on behalf of our residents to remove those cuts that we feel will do the most damage to our communities and Carmarthenshire as a whole.”