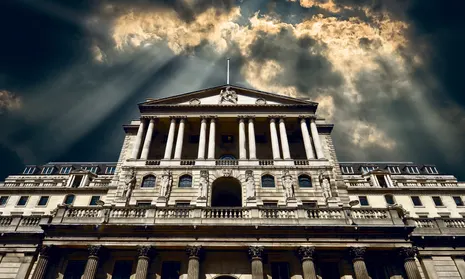 THE BANK OF ENGLAND has raised the base rate of interest by 0.75 percentage points to 3% – the single biggest increase in more than three decades – and said that the UK is already in recession.

The Bank warned that the UK could face a protracted contraction in the coming years, with high inflation and the unemployment rate climbing to 6.5% – the highest level since the financial crisis.

The length of its forecasted recession – eight successive quarters in which gross domestic product shrinks – would make it the most protracted since comparable records began – albeit less deep than most previous downturns, including those in 2008/9 and the 1980s.
The economy would still be well below its 2022 size at the end of 2025.

However, enormous uncertainty hangs over these forecasts: on the one hand they are based on market expectations for interest rates which were unusually high, which makes the economic outlook seem gloomier than it might be in practice.

Commenting on today’s decision to increase interest rates, Jonathan Rolande, from the National Association of Property Buyers, said: “The rate rise from 2.25% to 3% will be very unwelcome for millions of borrowers who are now faced with higher monthly charges at a time when household finances are under immense pressure. The need for higher rates to combat inflation is clear, but the NAPB hopes that the measures to combat price rises will be successful quickly before householders are driven into serious, long-term financial hardship.

“Today’s interest rate rise will feel like yet another nail in the coffin for the property market. Rates have already increased fast, and this latest hike will cause great concern amongst property owners and those hoping to buy.

“Homeowners will be very concerned about the likelihood of falling prices. About 80%  of mortgaged owners have a fixed rate but the clock is ticking, and thousands are coming off fixed deals and onto variable rates. This means that many will soon see repayments rocket. Those on variable rates already will feel immediate pain when the increase is passed on for December.

“Tenants aren’t immune to this rise either, because landlords will be looking tto recoup increased costs by increasing rent.
On how he thinks those looking to buy a property will react, Mr Rolande continued “Homebuyers have already seen rates rise and will have factored this  in. Prices aren’t dropping noticeably yet. I suspect

“Today’s interest rate rise will make a difficult situation even tougher for many people and businesses who are already struggling to make ends meet.

“The Bank of England has warned we are facing a long and deep recession that risks jobs, businesses and public services. The Chancellor must use his autumn statement to turn away from austerity and instead invest in the UK and deliver a meaningful and targeted cost-of-living support package.”