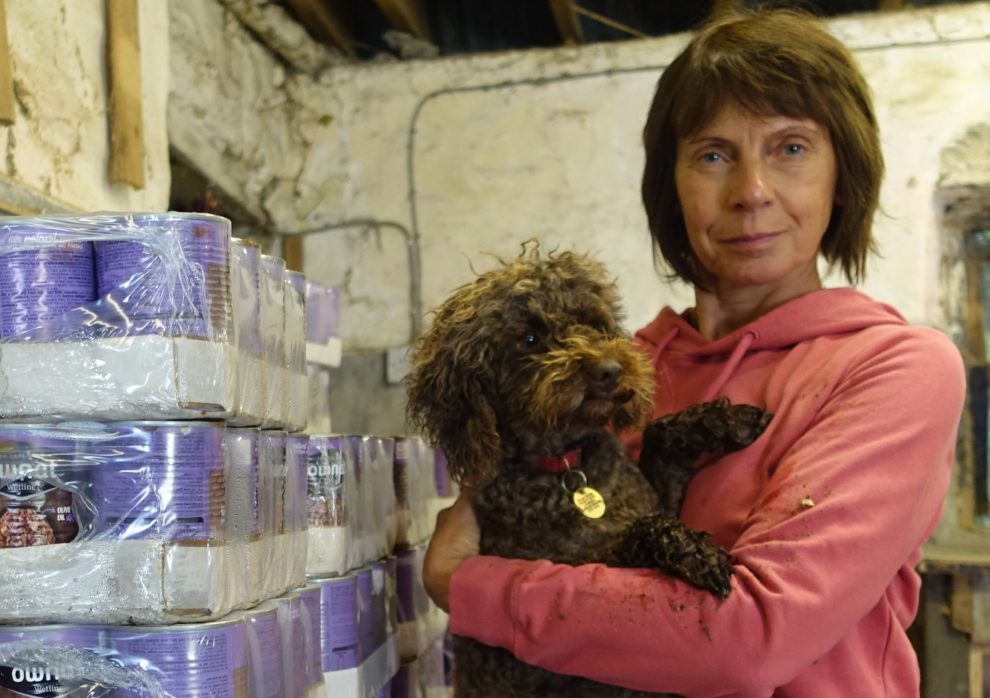 NEARLY 50,000 servings of pet food have been distributed across Wales via RSPCA branches since June.

The Wales Pet Food Bank involves securing dog and cat food donations from suppliers and then distributing these via RSPCA branches to food banks and organisations across Wales.

Recently RSPCA Carmarthenshire Branch have taken part in drop offs to food banks in order for them to distribute donations  amongst pet owners struggling to feed their pets due to the current cost of living crisis.

Carmarthenshire branch trustee Tracey Clarke (pictured with rescue poodle Dylan) said they were delighted to be part of the scheme and have been in the process of distributing four pallets of pet food.

So far donations have gone to Llandovery Community Centre food bank, and also the Gwili Cafe food bank collection point in Llandeilo. The branch also plans to get to further places across the county as well.

Tracey said: “It is just heartbreaking to think that due to the cost of living increase owners are struggling to feed their pets, and more and more are relying on food banks.

“We hope that through this food bank scheme we will be able to provide some support to people and their much-loved pets in the Carmarthenshire area.”

Tracey added that they have more food to distribute.

“We have recently taken delivery of tinned dog food from – United Petfood UK Ltd, Llangadog,” she added. “They were enormously generous and helpful in loading and unloading and we’d very much like to thank them.”

All 11 RSPCA branches in Wales are part of the food bank initiative – with a group of branches in North Wales (Aberconwy, Clwyd & Colwyn, West Gwynedd, Wrexham District & Deeside and Ynys Mon) initially coming together to fund and make this scheme possible.

The scheme was rolled out across Wales in June so all branches could join the effort to distribute the food where it was needed most.

Carl Lloyd, who has been coordinating the Wales scheme, said: “Since June we have distributed just over 49,000 servings of food to over 20 food banks and other groups across Wales.

“We know this is very much needed across Wales and we are very pleased to be able to help distribute this food which has been kindly donated to us.

“We have three RSPCA distribution hubs in Wales – Mochdre, Newport and at Llys Nini Animal Centre in Swansea, and from our last delivery, North Wales received 10 pallets, Newport received 19 and the Llys Nini hub received 10.”

This summer the RSPCA recently released its Animal Kindness Index, a groundbreaking inaugural report, in partnership with the Scottish SPCA, which looked at the nation’s attitude towards animals.

The report, based on a YouGov survey of more than 4,000 UK adults, revealed that the rising cost of living and the cost of pet ownership could threaten our love for our pets, with 72% of pet owners saying they think the cost of living will impact their animals, almost 70% expressing concern that the cost of care was increasing, and a fifth worried about how they’ll afford to feed their pets. The study showed cat owners seem to be most impacted and concerned about cost of living pressures. The RSPCA has published some cost of living advice – please visit https://www.rspca.org.uk/costofliving