LLANGENNECH proved too strong for St Florence on Saturday (Oct 8) as they booked their place in the second round of the West Wales Cup.

The Pembrokeshire League Division 3 side travelled with just the 11 players but they gave a good account of themselves throughout.

Liam Griffiths put Llangennech ahead in just the fourth minute as a corner came to him and he took one touch to control it before acrobatically firing in.

The home side then saw a shot hit the post while St Florence came close with a shot that went just over the bar.

A miss-placed pass then allowed the Saints in but Llangennech keeper Matthew Davies made a good save.

There was another chance for the home side but they saw a shot rebound off the bar.

A third Llangennech shot also hit the bar as they continued to search for a second goal.

It finally came in the 42nd minute as Alex Davies cut in from the left and fired a low shot into the net.

On the stroke of half time it was 3-0 as Kevin Evans played a ball into the box for David Lewis who shot low into the net.

Both sides had chances early in the second half with the hosts seeing a free kick tipped over while St Florence saw a shot curl just wide.

With 58 minutes gone, Llangennech scored their fourth. A good move saw David Lewis play a one-two with Callum Morgan and the former slotted home for his second goal of the game.

Ten minutes later the home side had a fifth as the ball was played into the box and after the Saints keeper failed to keep hold of the ball, Alex Davies tapped in to the empty net for his second of the game.

With fifteen minutes to go, Lewis Ensor diverted a cross into his own goal to give Llangennech a sixth.

Two minutes later it was seven as the ball eventually came to Kevin Evans on the right hand side of box and he fired back across goal and into the net.

Saints keeper Matthew Lewis made some good saves to keep the score at seven.

Llangennech saw the game out and can now look forward to their game in the second round. 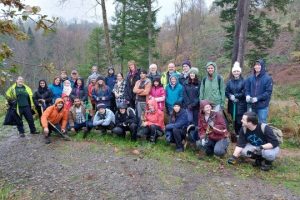