A HUGE pod of dolphins have been caught on camera just off the coast of Strumble Head, Pembrokeshire.

Lloyd Nelmes and his girlfriend captured footage of up to 500 dolphins while on a boat ride on January 25.

The video captured by the couple show the playful dolphins getting up close to the boat, and “bowriding” – which is when marine wildlife position themselves to be pushed forward by the circulating water caused by boats.

Sharing his experience on Facebook, Lloyd wrote: “The dolphins were very keen to bowride at any opportunity, with almost 10 individuals at some points under our tiny boat,

“The Stena then came in and they went over to it, bow riding and using the energy from the ship to jump what looked like almost the height of half the ship! Amazing to see!

“They were chasing mackerel I think, pushed a few to the surface and managed to catch a few for myself too.”

Lloyd described the feeling as though the dolphins were ready and waiting for him and his girlfriend as they took the trip. He also shared that he saw five porpoises near Pen Anglas as well.

“It was really exciting and amazing to see, the younger ones really do love to play around and jump.”

Spotting cetaceans such as dolphins, whales and porpoises at sea can be an exciting experience, but Sea Trust reminds anyone hoping to catch a glimpse themselves to adhere to the following advice and local marine codes: 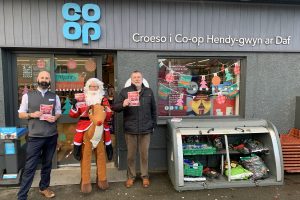