Home » JD Welsh Cup: Connah’s Quay made to work for win over Llanelli 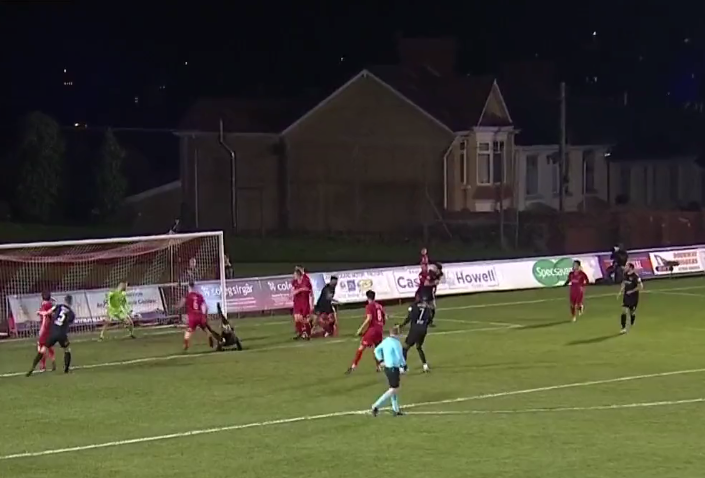 GOALS in each half by Ben Nash and Joe Malkin eased the Welsh Premier visitors through to the last eight of the JD Welsh Cup, but they were made to work had for the result against a home side who put up a solid defensive display against their vastly more experienced opponents and on occasions themselves threatened to cause an upset.

A pivotal moment in the contest came on 71 minutes when the home side were awarded a penalty when trailing by just the single goal after Thomas Hillman was brought down by John Disney, a blatant foul which did not even earned him a card.

Unfortunately, the spot kick taken by Reds` captain, Joe Hopkins, was kept out by goalkeeper Andy Firth and this ultimately proved to be crucial, as within five minutes Nomads added a second, and there was no way back for the home side.

Without strikers Eli Phipps and Tim Parker in the starting line-up, Hopkins, Louis Gerrard and Miles John formed the front three, but with the visitors dominating possession from the outset it was in defence that the Reds excelled with Sean Cronin and Jamie Baker colossuses in the middle, with the former winning the man of the match award from the S4C commentary team, while behind them, goalkeeper Scott Coughlan also played his part with a string of saves and being awarded the Reds` supporters accolade.

The eventual overall possession figure was 75/25 in favour of the Nomads, but despite this the hosts did an admirable job in keeping them at bay, although the goal did bear a charmed life at times.

The first threat came via a long throw into the box by Danny Holmes which was headed down and met by Jack Kenny, but Coughlan got down to divert his attempt around for a corner, and when this came across the Reds` keeper was alert again to keep out a header by Nash.

The contest continued in this vein with the hosts under almost constant pressure, with Coughlan safely clutching along range shot by Disney, before a quick attack by the home side culminated in Hopkins finding some space before skimming the crossbar with his effort, while Firth dealt comfortably with a Ryan Bevan attempt.

When the Nomads threatened again, Coughlan brilliantly turned over a fiercely struck shot from Callum Morris, before the visitors finally achieved a breakthrough on 30 minutes when a short corner was crossed into the middle by Josh Williams and met with a diving header by Nash to power it into the net.

The Reds best chance of at least getting an effort on target came with the award of a free kick on the edge of the box, but disappointingly Bevan blasted it well over the top.

When in possession, Hillman was proving to be a thorn in the Nomads` side with his incisive bursts, but despite the occasional threat the visitors` goal remained intact at the break, while they might themselves have got a second with Michael Wilde being denied from close range by the outstretched leg of Coughlan.

There were no takers by the visitors when Holmes delivered a dangerous delivery across the face of goal, and when the Reds made a change with Keane Watts replacing John he immediately linked up with Hillman before sending his finish past the far post.

Then came the incident which led to the penalty with Watts and Hillman again involved before the latter was crudely brought down by Disney, but what could have been a turning point in the tie was spurned when Firth dived to his left to divert clear the kick by Hopkins, and to add to the Reds` woes, when Watts attempted to turn in the loose ball he collided with the goalkeeper and eventually had to be helped off injured with Josh Allen taking his place.

This proved to be crucial, as the Nomads doubled the lead within five minutes with Malkin, with his first touch after coming off the bench, met another assist by Williams to direct his near post header over Coughlan after 76 minutes.

There was no way back for the Reds after his blow, and the visitors safely saw out the remainder of the contest to seal the win and ensure their entry into the last eight of the competition.

The Reds are back in league action at Stebonheath next Friday when they host Swansea University, kick off 7.30 p.m.