CARMARTHEN’s loyal travelling supporters, having witnessed a stunning performance against Llanelli last week which raised Town into second place in the Cymru South League, would have been entitled to anticipate another similarly impressive display against Cwmbran in this Welsh Cup tie – sadly, that did not happen.

Yet the Old Gold made a bright start and on 5 minutes Mathew Delaney burst into the penalty area and from 15 yards struck a fierce drive that goal-keeper Lewis Watkins turned aside with a smart save.

Moments later Liam Thomas raced along the left flank before sending the ball across to Bradley Gibbings who released a powerful shot that Watkins, at full length, forced past the post. Then from the ensuing corner-kick Tom Dyson emerged from the packed goalmouth to strike a promising volley that was cleared by a defender.

During this early stage the visitors were enjoying the greater share of possession and were keeping the Celtic defence under pressure albeit without creating many serious scoring chances. Yet gradually the hosts began to test the Carmarthen defence with a series of rapid penetrative raids – and on 20 minutes Tom Meechan embarked on a long run to the corner of the penalty area before releasing a powerful low drive that Town goal-keeper Ifan Knott, showing rapid reactions, turned around the post.

But moments later, in the 22nd minute, the young ‘keeper was powerless to prevent Cwmbran taking the lead when a corner-kick was sent into a packed goalmouth where midfielder Shaun Moss planted his close-range header into the back of the net.

The hosts continued to test the Old Gold defence for a period of time but were unable to create any decent scoring opportunities – gradually the visitors began to rediscover their earlier initial form and on 36 minutes Gibbins raced along the left flank and sent a fine cross into the penalty area where Dyson, from 15 yards, fired a fierce volley that defeated Watkins but flew narrowly over the bar.

Then moments later another fine chance arose when Sam Parsons sent his corner-kick into the packed goalmouth where Lee Surman leapt highest but saw his close-range header fly just too high.

Town continued to search for that elusive equaliser and on the brink of half-time they secured that aim. Greg Walters burst into the penalty area and was promptly brought down by a defender – equally promptly the Referee awarded a penalty. Carmarthen’s all-time top goal-scorer Liam Thomas stepped forward and with his customary composure and accuracy he drove the ball past Watkins and into the net.

After the interval the Old Gold made a remarkable start with their first attack – on 50 minutes they took the lead when substitute Noah Daley arrived in the goalmouth with perfect timing to meet an inviting cross and stab the ball into the net.

Regrettably, however, the mood amongst Town’s supporters soon changed – significantly.

In the 58th minute the Old Gold were defending within their own penalty area when Jamie Rickard inexplicably handled the ball – unsurprisingly he was sent off and the inevitable penalty-kick was converted by Alex Bonthron.

Worse was soon to follow. On 63 minutes a long through ball was pursued by Bonthron to the edge of the penalty area while Knott came well out of his goal – the end result of this confrontation was that the experienced striker fired the ball into the empty net.

However Carmarthen fought back from that disappointment and on 70 minutes they levelled the scores when Parsons sent his corner-kick deep into the crowded penalty area where Walters, at the far post, forced the ball into the net.

Town then suffered more misfortune on 78 minutes when Mathew Delaney was sent-off having received his second yellow card caution of the match.

And even worse was still to follow when in the second minute of added time a mass crowd of players led to the ball being forced into the back of the Carmarthen net thereby ending their interest in the Welsh Cup for another season. 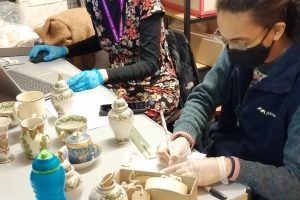