The choir was formed in 1977 under the baton of Ivor Thomas – never thinking that they would still be going strong 45 years later.

There have been many highlights during the 45 years: raising many thousands of pounds for charity; tours to Ireland, France, Belgium, Germany, Holland, Canada; tours within the UK; meeting Prince Charles etc, etc – too many wonderful events to mention here.

There have also been several Musical Directors and Accompanists over the years. Happy to celebrate 45 years there was also a tinge of sadness in saying goodbye to Peter Griffiths who had been the choir’s Accompanist for 27 years. Peter is well known locally for his amazing talents on the piano but too many commitments has meant that he has had to cut back on some duties.

The choir presented him with a commissioned portrait, thanked him for his contributions to the choir during his time with them and wished him well for the future. The dinner was the first event to celebrate 45 years and there will be others to follow. It is hoped to host a Grand Anniversary Concert in spring 2023, more details to follow after Christmas.

The choir is now back in full swing and performing concerts when requested. The next will be a performance at St Brides Castle on Thursday, November 10 for the visitors staying there. 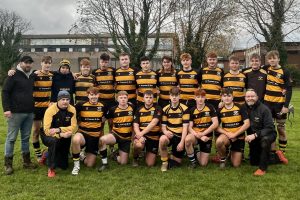