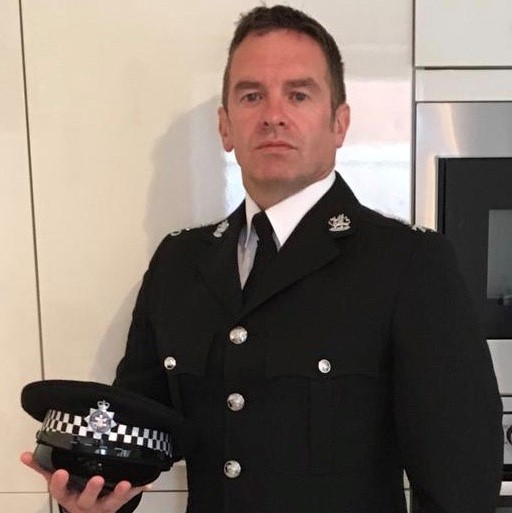 FOR the past five years, Craig Jones has been living two lives.

From Monday to Friday he’s been working his day job at Public Health Wales, but at weekends he’s been kitted up in his Dyfed-Powys Police uniform, ready to respond to whatever the shift throws at him.

Craig has been one of a team of Special Constables, giving up his time as a voluntary police officer to keep his community safe. As he gets set to hang up his uniform for the last time, Craig has urged anyone thinking about becoming a Special to go for it and apply.

He said: “I’m 50 now and I’ve had two careers – one in professional sport, and one in health – but nothing can prepare you for what you will see and do as a Special. When the public see you, they don’t see the little SC on your shoulder, and as you grow in confidence and experience, you don’t feel it either.

“You quickly learn that you and your colleagues have always got each other’s backs. You have to make split second decisions that can totally change the way an incident will go, and you save lives together.

Craig joined the Specials after he and his family moved to St Clears. Hearing that the local police station was set to close, the father-of-two wanted to do his bit for the town, and applied to become a Special.

He was successful and began the six weekends of initial training required before joining regular officers on duty.

“The best thing I was told was that even when you’re independent, you’re not on your own,” he said.

“You’re with a seasoned regular officer, and can learn from all their years of experience. They teach you things like reading little signs in a situation and when to hold back or jump in. I’ve had so much support from my Special and regular colleagues, and they’ve taught me more than I thought possible.”

Starting his Specials career in Carmarthen, Craig went on to spend a year on the force’s Mental Health Triage Team – establishing if officers dealing with calls would benefit from assistance from an expert in mental ill-health – and finally working out of Tenby police station.

“Working on the mental health triage team was great because it brought together my day job and my voluntary work,” he said.

“One of the incidents I’ll never forget is when we were carrying out an operation in Carmarthen and we got a call about a boy who was in crisis in the town centre. By chance, he said he knew me through my work on the mental health team, and he wanted to speak to me.

“I chatted with him for a while and subtly asked another officer to call an ambulance, which arrived quietly with no lights or sirens. He agreed to go to hospital if I was there when he arrived, which really stuck with me as showing the impact we can have on people.”

During his five years in uniform, Craig has made more than 100 arrests and given more than 1,100 hours to the force as he’s dealt with incidents ranging from missing people searches and road safety operations, to marshalling town events and engaging with the community.

“I’ve been spat on, punched, had a Stanley knife slashed towards me, attended suicides, broken up fights, pretty much anything you can think of,” he said. “We see people at their worst, and have an opportunity to try and help them in the best way we can.

“On the other hand, there are little things like seeing the smiles on children’s faces when you take the time to talk to them or let them wear your hat for a photo. We see every side of the community.”

One case Craig is particularly proud of involved a drink-driver who was taken to court. Thanks to his background in the health service and alcohol-related work, he was able to strongly counteract the defence case and the offender was given a lengthy ban.

“Taking someone off the road who posed such a danger to others felt like a huge success,” he said.

As he retires due to work commitments, Craig says he has no regrets – apart from not knowing the Special Constabulary existed sooner – as his time as a Special has had such a positive impact on him and his family.

“It is such a special family to be a part of” he said. “I joined because of my family and wanting St Clears to have a police presence, and I ended up with a police family.

“There’s no better feeling than doing something for your own community, and no matter what age you are, you will learn so much about yourself doing this – things you never knew before. You will use skills on every shift that will transfer to your other life.

“I miss it already, and I know that as time goes on I will miss it even more. But I’m so glad I have had the chance to do this for the past five years – it’s been brilliant.”

* Dyfed-Powys Police is currently recruiting for its Special Constabulary. For information on how to apply, click here

Police on scene of alleged armed robbery in Llanelli

£4,000 fine for equipment supplier who provided speakers at an illegal rave