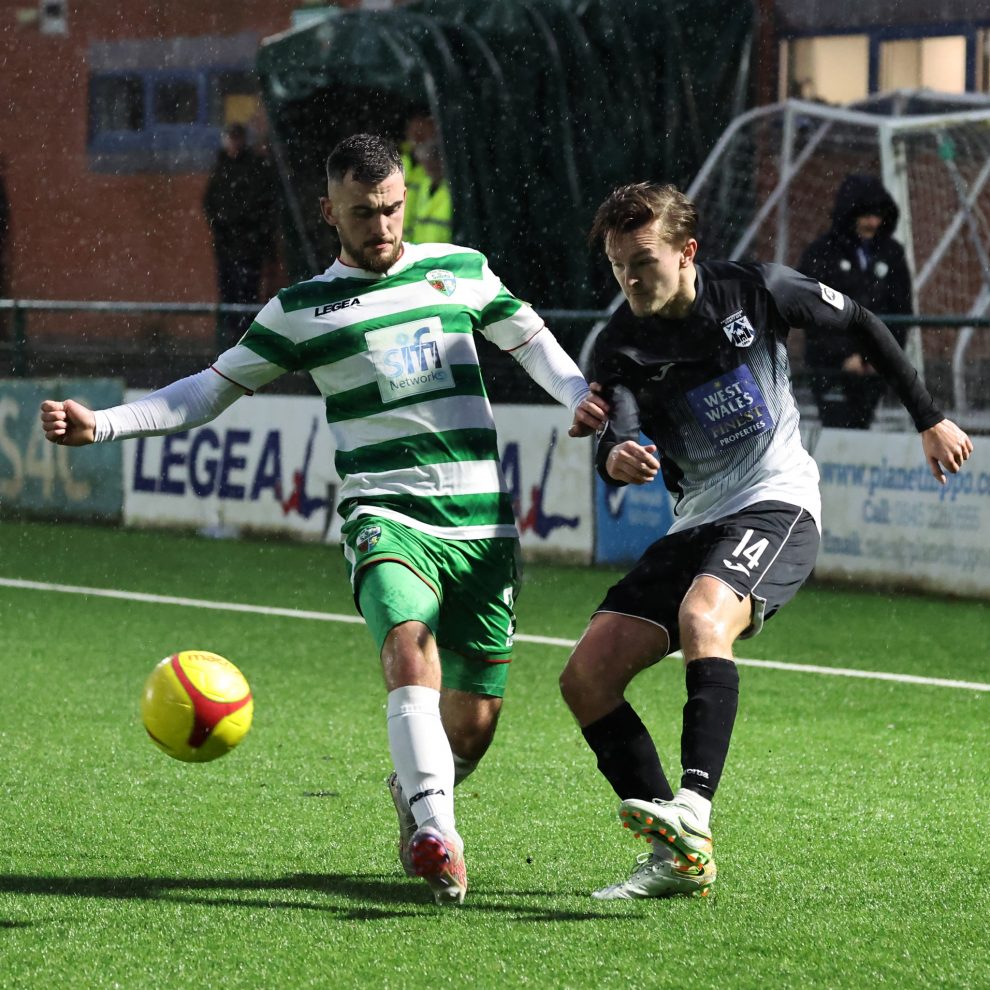 Haverfordwest County showed their fighting quality to ensure reigning champions The New Saints had to work to the final whistle for their 3-1 victory at Park Hall yesterday.

Early goals from Ben Clark and Ryan Brobbel meant the Saints led at half-time, but the Bluebirds remained in the contest and Ben Fawcett’s close range finish just after the hour-mark ensured an exciting finish in Oswestry.

Prolific striker Declan McManus ensured the victory for the hosts one minute from time, with County able to take plenty of positives from their performance, with Tony Pennock’s side refusing to lie down and showing desire to get forward whenever the opportunities presented themselves.

The result sees Haverfordwest County remain seventh, after Caernarfon Town had missed the chance to move up a place with their 5-1 defeat away to Penybont earlier in the day.

Manager Pennock made three changes to the side which drew with Pontypridd United on New Year’s Eve, as Kyle Patten made his return to the team along with Jamie Veale and Henry Jones, who came into the midfield.

The first opportunity fell the way of the Bluebirds, and it was a golden one as Rhys Abbruzzese played an inch-perfect through ball to Jordan Davies, who took it around Connor Roberts before seeing his shot on the angle hit the side netting.

After the hosts had seen a couple of efforts miss the target, they went ahead on the quarter of an hour mark when a break upfield ended with Clark finding the top right corner of the net with his shot from inside the area.

Just four minutes later, the Bluebirds found themselves 2-0 behind when Danny Redmond’s cross into the area picked out Brobbel, who dived to head home from close range. The forward then hit the left post with his shot from 20 yards as the Saints pushed for a third goal.

Pennock’s side managed to make it to half-time without any further damage, and knew that if they could find the third goal of the afternoon the game would suddenly become a lot more interesting.

Zac Jones made an impressive diving save to deny Saints captain, Jon Routledge, before Brobbel somehow managed to direct his effort from point-blank range over the crossbar from a ball into the area.

This would have undoubtedly ended the contest, however five minutes later County were suddenly right back in the game as Jack Wilson put a dangerous cross into the area which Fawcett showed determination to get on the end of and divert past Roberts to halve the deficit.

This goal signalled a shift in the momentum, as the hosts started to become sloppy and the Bluebirds began to grow in confidence.

There were a couple of nearly moments for the visitors, who were having much more of a say in the game, however they were being kept at bay by a Saints defence who had conceded just six times in the league before this match.

A big moment in the game arrived with just under 14 minutes remaining, when Jordan Davies threatened to break through on goal after winning back possession, however the forward was brought down by Ryan Astles who saw yellow for the cynical foul.

The game was still in the balance in the closing stages, with Ryan George and Elliott Dugan introduced from the bench to add energy in the search of an equaliser.

However, with just one minute of normal time remaining, substitute McManus placed a precise curling effort past Jones into the right corner to clinch the victory for Craig Harrison’s side.

The Bluebirds are next in action on Saturday, January 21, when we host Connah’s Quay Nomads in the final game of Phase One at the Ogi Bridge Meadow. Kick-off is at 2.30pm.