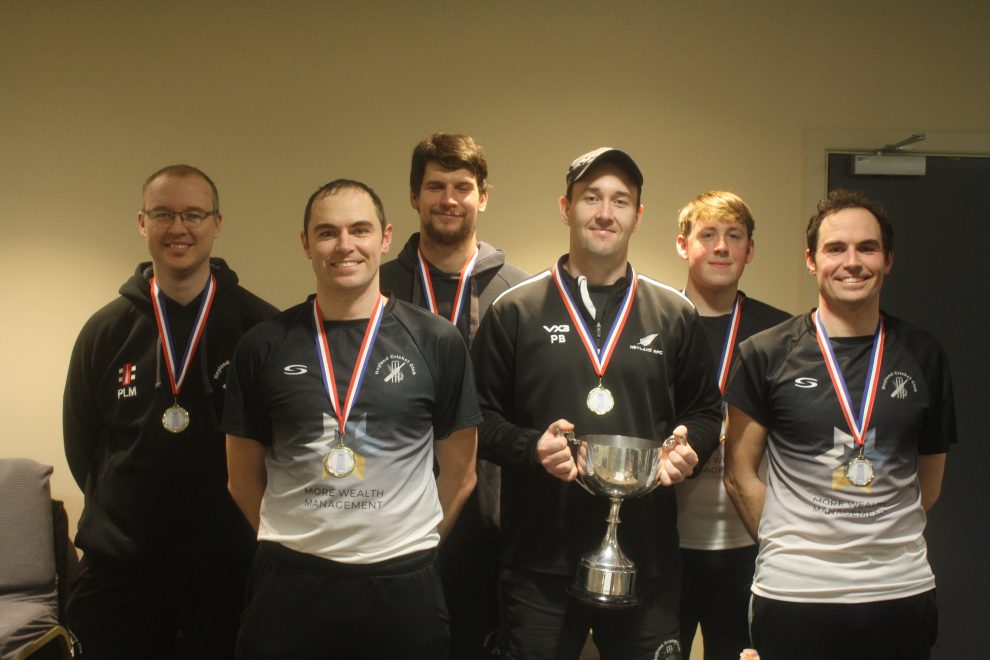 NEYLAND A were crowned Pembrokeshire Indoor Cricket League champions on Monday night (Jan 23) as they earned wins over Neyland B and Pembroke Dock.

The final was held in a round robin format with the three best teams from the league programme taking part. After wins for Pembroke Dock against Neyland B and Neyland A against Neyland B, it came down to the final game between the Dock and hosts Neyland.

Neyland ultimately proved too strong for the Dock and they now advance to the National final, to be played at Morriston on Sunday, January 29.

In the first game Pembroke Dock won the toss and chose to field. Neyland B openers Callum Power and Lewis Page shared 28 runs for the first wicket before Power was bowled by Neil Gregory on a score of 19 (1 six).

Page fell soon after when he was bowled by Jake Davies but Gregg Miller and Stephen Murray added to the runs. Murray hit a four and a six before retiring not on 26.

Sam Laugharne made a quickfire 15 before being run out by Scott Griffiths and it left Miller unbeaten on 25 from 11 balls (1 four, 1 six).

It meant the Dock would need 102 to win the game and although they lost Tom Grimwood early on, Scott Griffiths reached a score of 25 before retiring and Rhys Daley retired on 27 not out.

Jake Davies and George Smith each hit a four and a six in their scores of 13 and 15 from 7 balls as the Dock won the game with three overs to spare.

In the all-Neyland affair, the A team won the toss and chose to bat first. Neyland A put on 93 runs before losing the first wicket, the majority of the runs coming from Patrick Bellerby who hit two fours and two sixes in his score of 32 from 16 balls.

Sean Hannon was the first to fall as he was caught by Gregg Miller off the bolwing of Sam Laugharne.

Patrick Hannon made a good score of 19 but he was run out by Miller and the B team had a third wicket when Lewis Page ran out Jack John.

However, scores of 32 from Paul Murray, before he was caught and bowled by Stephen Murray, and 23 not out from Nathan Banner helped Neyland to a score of 130-4 from their 12 overs.

Ashley Watkins was then caught by Paul Murray off the bowling of Sean Hannon as Neyland B slipped to 44-3.

Stephen Murray was then stumped by Paul Murray off the bowling of Patrick Bellerby as their chase began to slip away.

Gregg Miller had hit a four and six in his score of 25 from 18 balls but when he was bowled by Bellerby it left Callum Power in as the last man.

He batted well to finish unbeaten on 33 but it wasn’t enough as the B team fell 49 runs short of their target.

It came down to the final game with the winner going on to represent Pembrokeshire in the national finals. Neyland won the toss and chose to bat and they saw Paul Murray and Patrick Bellerby share 31 runs for the first wicket.

Scott Griffiths made the breakthrough for the Dock as he had Bellerby caught by George Smith on a score of 13.

Murray went on to score an unbeaten 27 before he retired. Sean and Patrick Hannon took over as they took Neyland’s score on to 79.

Sean scored 23 from 17 balls but he was then run out by Jake Davies. Nathan Banner was also run out by George Smith.

There was a late score of 11 from Jack John before he was also run out by Tom Grimwood while Patrick Hannon finished unbeaten on 25 to see Neyland to a total of 120-4.

Pembroke Dock’s reply faltered early on as they slipped to 8-3. Grimwood was caught by Patrick Hannon off the bowling of Jack John before Nathan Banner trapped Scott Griffiths leg before.

John then claimed a second wicket as he had Rhys Daley caught by Patrick Hannon.

That ultimately left the Dock with too much to do and despite scores of 15 from George Smith, who was run out by Patrick Hannon, and 25 from Jake Davies, who fell to the bowling of Sean Hannon, they were bowled out for 48.

After the game, Neyland A were presented with the trophy while individual performances from the league programme were also recognised. Neyland’s Paul Murray was the best batter; Jack John of Neyland and Chris Phillips of Haverfordwest were the joint best bowlers with eight wickets each and Pembroke Dock’s Scott Griffiths was the best fielder with nine victims.

There is one more finals night next Monday, January 30, which sees Pembroke, Hook and Burton battle it out for a chance to win promotion to the first division.